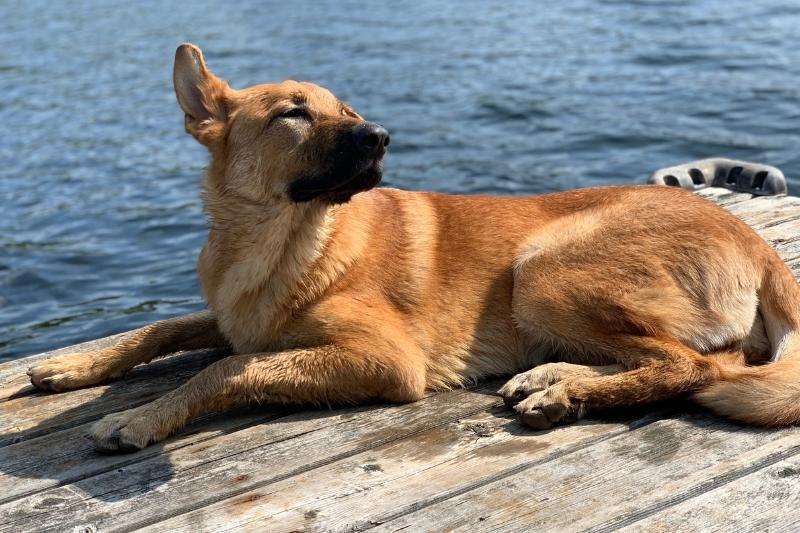 Do you LOVE golden retrievers and german shepherds? If you're like us, no doubt you love the world's two most popular breeds. Could you imagine the cuteness if you took them two together and combined them into one mixed dog?

Well, no need to imagine anymore; there is such a thing known as the Golden Shepherd.

This beautiful breed originates from Germany and comes in a range of colors from black, black and tan, grey, red and black, black and grey, and dark brown. They can weigh anything from 60-95 pounds and grow up to 20-27 inches tall!

Their body tends to be more similar to a German Shepherd and a face like a Golden Retriever. This breed is just simply beautiful.

Beautiful would be an understatement for this breed; there are more wonderful snippets of information you deserve to know about. To help spread the love about the Golden Shepherd mix, we've composed a list of 15 wonderful and weird facts for you to know.

This retriever shepherd mix is no dumb dog. As you can imagine, their parent, the golden retriever, is the fourth smartest dog in the world! Similarly, the German Shepherd can have an IQ score of up to 60! Now, can you imagine a Golden Shepherd's intelligence?

Because of their intelligence and pleasing side, this dog is easy to train. If you decide to get a Golden Shepherd, they respond well to positive reinforcement training and reward type training.

2. They're friendly to be around.

If you're looking to buy a new dog for your home, then you may want this breed. A Golden Shepherd is a social animal that loves to be around humans and is tolerant of other animals at home.

Unlike other breeds, a Golden Shepherd does not particularly cling to its master all the time; they love to play and socialize with other humans. Similarly, it's not recommended to leave them for long periods at home alone because they can become attached to the family.

On the contrary, they're friendly only the case if you socialize with a Golden Shepherd from a young age. That means taking the dog out for regular walks when they're a puppy and let them become acquainted with other humans and animals. Otherwise, if you don't, they could become hostile.

3. Golden Shepherds can double up as a guard dog

Most of the time, golden shepherds are not nasty or vicious; their temperament won't allow them to be. However, if you ever find a stranger at your gate or even a strange animal, the golden shepherd mix will make their presence aware with a bark or two.

Golden Shepherds are certainly not by any means a lap dog. This breed is filled with lots of energy and requires frequent mental and physical stimulation. First of all, because they have a lot of energy, if you were to own one, you'd have to intensely exercise a Golden Shepherd for at least 60 minutes each day to tire them out.

Plus, because they're smart, you will have to play games to nurture their brains. Such games you can play fetch, ball throwing, and filling their toys with treats.

If you want a dog with little maintenance, then the Golden Shepherd may not be for you. This breed requires regular grooming; we're talking 2-3 times per week!

This is because they're a moderate shedder and often leave lots of hair lingering on your clothes or furniture. If you groom them regularly, you'll keep their coat intact and will have fewer hairs in your house.

In addition to brushing Golden Shepherd regularly, they also should be washed every 6-8 weeks. This ensures their coat to be kept clean and also keeps its natural oils in the skin intact.

6. Golden Shepherds eat 1500 worth of calories a day

You'd be surprised; Golden Shepherds nearly need just as much caloric intake a day as humans do! That's equivalent to 2-3 cups of food a day, breakfast, lunch, and dinner. If you split their meals fairly, this will prevent them from bloating.

Similarly, because they have lots of energy, vets recommend they have kibble, which is superior quality. No matter what you feed a Golden Shepherd, you still have to monitor their diet. Large breeds like these can become obese easily; therefore, you need to feed them a balanced diet and exercise them regularly.

7. Golden Shepherds are not a cheap dog

If you're looking for a dog that is only a couple hundred dollars, then don't expect to buy a Golden Shepherd. This breed costs anything from $400-$800! But then again, so many factors can influence the price you pay for a Golden Shepherd.

For instance, it could be down to the breeder, parents, location, health history, color, and more. Similarly, depending on whether you get them from a breeder or shelter can also influence the price you pay.

8. They're known to have a few health problems

Generally, the Golden Shepherd breed tends to be a healthy dog. However, just like other animals, they can be subject to a few health problems during their lives. Such health problems you can expect them to have are:

Usually, these health problems are rare, but the best way to know if a Golden Shepherd is at risk of any problems is to speak to the breeder before buying the dog. Make sure the breeder provides full health records of the parents and the puppy.

9. They're classed as a designer dog

A designer dog, did you say? Yes, well, according to the American Kennel Club, a Golden Shepherd is not a purebred; therefore, it's not officially recognized as a designer breed as per the designer breed registry. A designer dog specifically means a cross between two bred dogs who have very little puppies.

If you buy or adopt a Golden Shepherd, it generally tends to have a life expectancy of 10-14 years. However, do note, you'll need to exercise it regularly, feed it suitable food for its age and give it plenty of affection.

The retriever Shepherd mix has large amounts of energy, which needs to be used regularly. They can go for long walks at a time, as long as they have water to drink and food to eat. Many people who own Golden Shepherds take them out hiking, as they can keep up with them! They also like to run and go swimming too.

12. They can have a large litter

Another great thing about Golden Shepherds is that they can have large litters of around 6-10 puppies at a time. Because of the Golden Shepherd's parents, when a dog has puppies, they will generally tend to be very friendly due to their inheritance.

However, if they inherit more from the German Shepherd side, they could be cautious around strangers and animals. Therefore, if you have puppies, make sure they experience socialization from a young age to prevent this from happening later on.

13. Obesity is common for Golden Shepherds

As we mentioned earlier, Golden Shepherds sometimes don't know where the line is when it comes to eating. That means if their portions aren't controlled, they won't know when to stop and can gradually become fat.

In addition to their meals, they can become fat easily due to unhealthy treats if given regularly. If the fat adds up onto their body, this can cause them a lot of difficulties on their joints, and later on, when they're older, they could become subject to a lot of pain.

Just like their parent, this breed is big and can be heavy to pick up. On average, a Golden Shepherd will weigh anything between 50-80 pounds. This is because they have a thick body, a deep chest, and a frame, which is study. A Golden Shepherd also has long triangular shaped ears, huge paws, and a long tail.

Overall, Golden Shepherds are a fantastic breed to have; they're friendly, loyal, and highly intelligent. Because they're smart, they require constant mental stimulation and need brain games to play. Similarly, they need to be exercised for at least 1 hour a day, and that's not just a walk.

Talking about exercise, these animals love to go on hikes, swim, and regular walks. They even have a water-repellant coat, which allows them to love the water. Speaking of their coat, they shed a lot and require regular grooming.

Thanks to Luna the Golden Shepherd for the picture ! Go check their account for more pictures about golden shepherds.