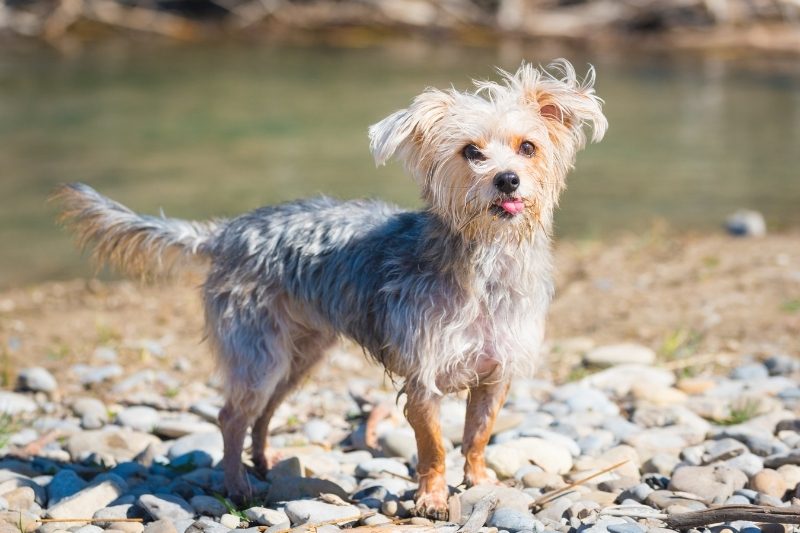 The Morkie is an adorable small pup with a big personality. These Maltese Yorkie mixed dogs make amazing pets and absolutely everyone will be stopping you to tell you how cute they are (especially if you get a Morkie puppy)!

Quick overview of the Morkie

Because a Morkie is a Yorkie Maltese mix, it suffers from some of the same health conditions as its parent breeds, including:

Temperament of the Morkie

They may look small and cute, but Morkies are not aware of their size. In fact, they might give a German Shepherd the eye if they come too close to their ball in the park. They have big energy levels too, which don’t quite match their tiny feet. They’ll be more than happy to spend a long afternoon chasing a ball in the backyard or playing with you.

Because of the Terrier in them, they can occasionally be a bit stubborn. If they don’t want to do something, they’ll happily sit their little butts down on the floor in protest – forgetting you can easily scoop them up in one hand. It’s important that you train a Morkie early on to reduce stubborn behavior.

Having said that, training Morkie dogs isn’t the easiest thing and really depends on whether they want to cooperate or not. Make sure you keep it fun with lots of praise, toys, and treats to entice them.

Something else you might not expect from such a small, adorable pup is that they make really good guard dogs. Again, giving the German Shepherd a run for its money. In fact, many Morkie owners say they’re too good guard dogs. They like to bark at anything coming close to the house, including a little bird, a car, or your neighbor. Their love for yapping means they’re not ideal apartment dogs– unless, of course, you’re not a fan of your neighbor.

Even though they think they’re big pups with lots of energy, Morkies love to make use of their little size too – especially if that means curling up on the sofa with you. They’re very affectionate dogs that love human attention and contact.

Morkie coats are a mix of both parent breeds’ colors. They can be black, brown, or white, or, more commonly, a mixture of all three. It’s also possible that the color of a Morkie puppy’s coat changes as they get older.

Just like both parent breeds, Morkies have long, fine, and silky hair that requires a bit of maintenance to avoid knotting. Although they’re not considered a hypoallergenic dog breed, they don’t shed as much as others and can be suitable for allergy sufferers.

There’s such a thing as a ‘teacup’ Morkie and, yes, they’re as cute as their name would suggest. Smaller even than their big cousins, they could probably fit inside a teacup. But if we’re talking about standard Morkies, they’re around 8 inches tall and weigh 6-10 pounds. Their faces are typically groomed to look more rounded than they are, but under all that beautiful fur they have a fairly long muzzle (not exactly long, but long for a tiny pup that is only 8 inches tall). Their jaw is on the thin side, which can lead to dental problems later in life. Their little legs should be straight when looked at from the front or back but they may turn outwards as they get older, causing some joint problems.

Health of the Morkie

As difficult as it is to predict the future health problems of any pup, crossbreeding reduces the chances of them having severe issues compared to their purebred parent breeds. That doesn’t mean Morkies are free from health problems, it just means they have less than a Maltese or a Yorkshire Terrier.

They can suffer from a collapsed trachea (when the rings of the trachea become weak and collapse in on themselves). It’s important to put your Morkie in a harness rather than on a leash as this reduces the strain on their neck.

Morkies often have ear, mouth, and eye problems. It’s important you regularly clean all of them, especially their teeth which should be done daily. Checkups with the vet will help reduce any serious problems and catch them early on.

As well as cleaning their ears, mouth, and eyes often, you also need to give them a monthly bath with a good quality shampoo and conditioner. This will keep their beautiful hair looking all silky. Regular (even daily) brushing is also recommended. Their hair is quite fine and can matt quickly. Brushing helps avoid this. You should also keep an eye on their nails and clip them when they get too long. If you’re unsure, a groomer can help you with this.

Like with most designer mix breeds, there’s not a lot of information about exactly when the Morkie was first bred. Of course, it could have happened naturally through time, but it’s likely they were first intentionally bred in the 1990s. As stories spread about just how cute they were and how tiny Morkie puppies were, their popularity increased in many countries. Full of personality, affectionate, and minimal shedders, there’s no wonder these little pups have become favorites of so many!

Do you prefer big breeds of dogs or smaller ones? Why? Let us know below!