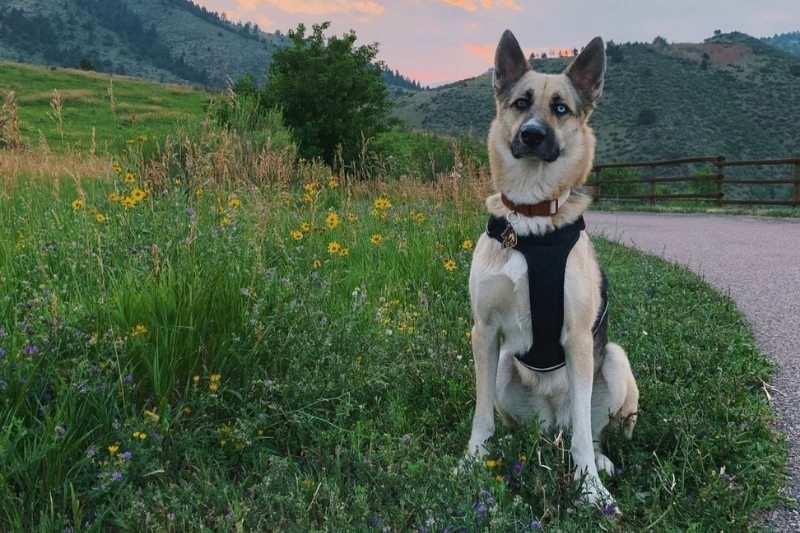 This high-energy mixed breed is affectionate, friendly, and highly intelligent. With its parent breeds being the German Shepherd and the Siberian Husky, that’s hardly a surprise. These dogs make great, fun-loving family pets who are loyal to their humans.

Quick overview of the Shepsky

Temperament of the Shepsky

There are many reasons why two breeds are originally mixed. Sometimes it’s for appearance and other times it’s to enhance a particular trait in the parent breed. When it comes to this German Shepherd and Husky mix, it’s for both.

You get a very attractive pup but also one with the best bits of its parent breeds. Mix breeds normally have one more dominant parent breed, so any particular Shepsky may look and act more like a Husky or a German Shepherd.

In general, though, Shepskies are very energetic, hard workers, who love to be put to a task as much as playing with their family members. Both German Shepherds and Huskies are working dogs (one a guard dog and one a sled dog) so Shepskies need activities to keep their brains occupied and focused.

Because they’re energetic, the Gerberian Shepsky (as they’re sometimes called) doesn’t do well being left alone for long periods of time. They need to be entertained and have plenty of exercise otherwise they could become destructive and get up to all kinds of mischief. Their superior intelligence also means they can be quite creative in their naughtiness, such as in their escape attempts. It also, however, means they are exceptional dogs in training and are often used in the police force and army.

As well as the intelligence and alert nature associated with German Shepherds, Shepskies also inherit the loving, fun, and affectionate nature of the Husky. That’s some mix. They’ll be protective around their family but will constantly wag their tail as they run for a ball or get cuddles.

As with all dogs, this Husky German Shepherd mix needs early socialization and training. They need to be exposed to people, new sights, sounds and smells to be able to grow into an all-rounded pup. They’re also pack animals so don’t be surprised if at the beginning they’re unsure of the hierarchy. You need to ensure they know that you’re the leader to prevent overly dominant behavior.

Shepskies come in a wide variety of colors and can be a mix of them all – it’s very rare that they come in one solid one. These include black, brown, grey, white, cream, blue, and gold. Like their Husky relatives, they can also have different colored eyes including black, brown, and light blue.

As with their parent breeds, these dogs have a double coat. That means they have a straight, dense outer layer of hair and a softer, thicker layer underneath. Whilst that’s brilliant for pulling sleds in minus temperatures or keeping them warm whilst on night guard duty, it does mean more work for you. Before getting a German Shepherd Husky mix, you’ll need to invest in a good vacuum cleaner because these pups will shed. Regular grooming (two or three times a week) will keep the fluff in your house to a minimum!

Shepskies are not considered a good breed if you have allergies. Here is a list of hypoallergenic dog breeds.

Shepskies are medium-sized dogs with pointy ears, a fairly angular face, and a long nose. Depending on whether the German Shepherd or Husky genes are stronger, they may pay more resemblance to either.

Health of the Shepsky

Like many mid and large breeds, Shepskies can suffer from hip and elbow dysplasia. Both Huskies and German Shepherds are also affected, so it’s no surprise that their mix breed is too. A good breeder will provide you with the parents’ history so you can see if there might be a problem for your pup based on their lineage. Regular check-ups at the vets will also help to reduce the risk and catch any symptoms early on.

Many mixed breeds manage to avoid health problems that plague their purebred parent breeds, but a German Shepherd Husky mix can’t avoid all eye problems. They may suffer from juvenile cataracts, dystrophy, and keratitis. It’s important you take your dog to the vet if you notice anything different – especially cloudy eyes – and that they have regular checkups.

As mentioned before, Gerberian Shepskies have double coats, which means that shedding can be a bit of an issue. Brushing them a few times a week can help. You also need to regularly clean their ears and eyes and make sure their nails are clipped well. If you’re not sure, a groomer can help.

Like with many mixed breeds, the exact origin of the Shepherd Husky mix is unknown. Of course, they could have occurred naturally throughout time but it’s presumed that they were first bred in the 1980s when designer dogs were gaining popularity. There aren’t, however, that many records from that time to be 100% sure.

Breeders wanted to create an incredibly intelligent, loyal, and affectionate hybrid dog that would be a great worker and a great family pet. The more Shepskies there were, the more the demand for them increased. Today they’re a really popular breed of dog that have great traits of both their parent breeds.

Would you consider getting a German Shepherd Husky mix? Why or why not? Let us know in the comments!

And thanks a lot to @blue.eye_skye on Instagram for letting us use their pictures. Go follow them 🥰