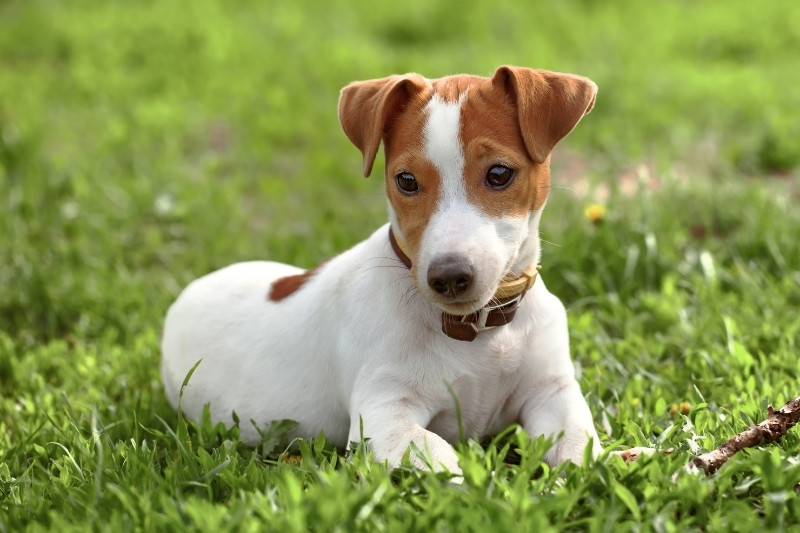 Jack Russells are charming, intelligent, and fun little dogs. But they can also be feisty and a bit of a handful for novice owners!

They're easily recognizable thanks to their inquisitive expressions, strong bodies, and predominantly white coats.

But did you know there are actually lots of different Jack Russell colors and markings? They're all just as cute as each other and make these dogs even more popular!

As well as having many different coat colors (which we'll get onto in a moment), Jack Russell Terriers also come in three different coat types. This breed can have a smooth, broken, or rough coat and they're all double coats – meaning you can expect a fair amount of shedding.

A smooth coat appears sleek but isn't necessarily soft. It's quite short and is the easiest of the 3 types to care for. Dogs with smooth coats will need a couple of brushes a week to keep their (predominantly white) loose hair from covering your home. They won't need a bath that often but a smooth coat can attract dirt and oil easily. Brushing should get rid of most of it!

Jack Russell Terriers with a rough coat have longer hair that covers their entire body. Unlike their smooth-coated cousins, a rough-coated Jack Russell doesn't appear sleek but rather a bit wiry. They don't require too much more brushing, however, but you might want to take them to a groomer once a year to be stripped.

A broken coat is a mixture of both the smooth coat and the rough one. A Jack Russell Terrier with a broken coat will probably have shorter hair than one with a rough coat but they might have a beard and eyebrows!

All three coat types can be any of the following colors or combinations. Some are more common than others but they're all just as cute as each other!

It's quite common for these feisty little pups to have a white body with black patches and markings on it.

It's not particularly common for owners to have an entirely white dog. But it can happen! Many Jack Russell puppies are also born completely white and develop darker markings as they grow older.

The shade of brown can be chestnut, dark, or light, making this a really popular coat color for Jack Russell Terrier lovers! The brown markings can be all over their bodies and are often on their heads.

This is another common color for Jack Russells. The body is white with tan markings all over it.

White and lemon Jack Russell Terriers are particularly cute (especially on rough coats). The yellow markings can be pale or a slightly darker and richer color.

Do you have pictures of a Red and White Jack Russell? Send it to us and we'll feature you!

Red and white Jack Russell Terriers usually have red markings on their faces and a few over their white bodies. It's one of the most common colors for this dog breed.

There's a reason so many Jack Russell Terriers are called Spot. It's common for these white dogs to have a colored patch that covers their eye. In all likelihood it will only be over one eye – it's unusual for these pups to have two spots!

As with the over-eye patches, it's common for your Jack Russell's adorably floppy ears to be covered in markings. They might be small, large, and of many different colors.

Jack Russell Terriers with a full face mask are really striking. The contrast between their white bodies and colorful faces is really beautiful. The face can be a number of colors (common in this dog breed) and it looks particularly cute on those pups with smooth coats!

It's common for these dogs to have large spots on their backs. These saddle markings can be a single color or different colors if the dog is tri-colored.

History of Jack Russell Terriers – why are they white?

As with many dog breeds, Jack Russell Terriers are named after the man who first bred them. Parson John Russell (nicknamed Jack by his friends) wanted to breed a small Terrier that could help hounds hunt foxes in the English countryside. They were originally bred dark brown or tan, but hunters found it difficult to distinguish these pups from the foxes in the field. They ended up breeding them to be white so they could tell them apart! That's why there are so many Jack Russell colors but they all include white.

This dog first came to the U.S. in the 1930s, nearly 100 years after they were originally bred. But it wasn't until 1997 that these pups were accepted by the AKC. Many clubs weren't sure of their hunting dog status, which is why it took so long!

Which of all the coat colors is your favorite?