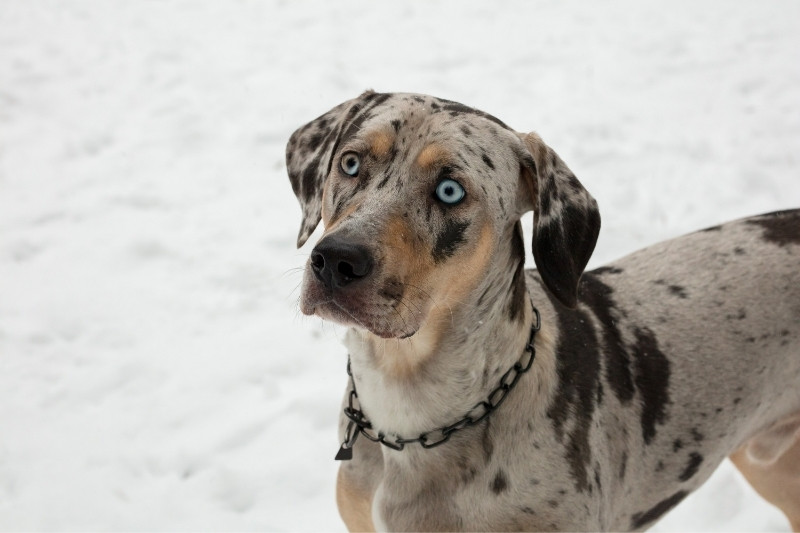 When deciding to get a family or working dog, you may be curious about the Catahoula Leopard dog. Apart from their active nature and fun-loving personality, the Catahoula dog appears in many colors, such as tan, grey, silver, and even red.

No matter the color, though, they are independent and rowdy at first. Eventually, Catahoula puppies can become the ideal family pet. But first, you may want to know some background on your potential future pet.

According to the American Kennel Club, Catahoula dogs are mainly an energetic breed capable of fulfilling traditional working roles, including stock dogs or watchdogs. In addition, the American Kennel Club states that Catahoula dogs were first bred in Louisiana and remain the only dog to originate there, contributing to the unique history of this breed.

Next, the United Kennel Club notes that the Catahoula dog can be recognized with a boxy head, drop ears, and muscular body.

However, what makes the Catahoula breed stand out is the wide range of colorations of eyes, nose, and, most importantly, coat colors, such as tan or blue.

For instance, the United Kennel Club observes a fault in the Catahoula appearance when the dog has a coat of 70 percent or more solid white coloring, proving that colors like solid red are widely prized.

They even explain that there is an “endless” variety of coat colors, though other colors stand out as more common.

What colors are Catahoula dogs?

As implied by its name, the Catahoula Leopard Dog is a beautiful dog known by many for its speckled coat.

However, not all Catahoulas possess speckled coats.

Instead, the variety of colors, markings, eye colors, and other traits contribute to the Catahoula breed's unique and renowned appearance.

Some Catahoula colors might include this speckling, called merle in some breeds but leopard by the NALC; a brindle coat consisting of a base coat with contrasting stripes; a patchwork coat; or a solid color coat.

Coats in the patterns can come in any number of colors, including but not limited to:

The Color of Louisiana Catahoulas eyes

In addition to these coat colors, Catahoulas may have a variety of different eye colors as well. Prized above all are glass eyes almost white in color.

However, eyes may also be blue, green, brown, or amber and have spots or cracks of other colors.

When one first learns of the different colors and patterns that a Catahoula Leopard Dog's coat color can be, it can be overwhelming.

As there are endless different patterns, combinations, and solid colors it may be hard to explain what you are looking for or describe in the Catahoula dogs you see. However, Catahoula breed colors can be categorized to simplify their identification.

The most famous coat color of the breed is by far the Leopard coat. This spotted appearance is called merle in other breeds; however, as it is characteristic of the Catahoula, it deserves a special name. Many people seek out Catahoula Leopard Dogs specifically for a Leopard coat and most commonly for a blue Leopard coat.

Blue Leopard coats are characterized by a light gray color that appears to be almost blue and will be patches on a black or darker coat, in addition to other patches of gray.

If you are not specifically looking for a blue Leopard, you can also see red Leopard Catahoulas, which are a reddish-brown color, brown, white, dark or black, and gray leopards.

Patchwork refers to larger spots of solid color that are typical with a Leopard coat. The same color combinations may occur in these patterns as in the Leopard patterns, so there may be instances of tan trim on a red coat, light red patchwork on brown, solid red, solid brown, and more.

While Catahoula Leopard Dogs can come in infinite different colors and patterns, making the process of identification slightly more complex, this only means that every single dog of this breed is unique and beautiful.

If you are looking to add a loyal companion to your family for many reasons, a Catahoula could be a great choice. The state dog of Louisiana is a gorgeous breed to admire while also being an energetic, fun-loving friend for years to come.