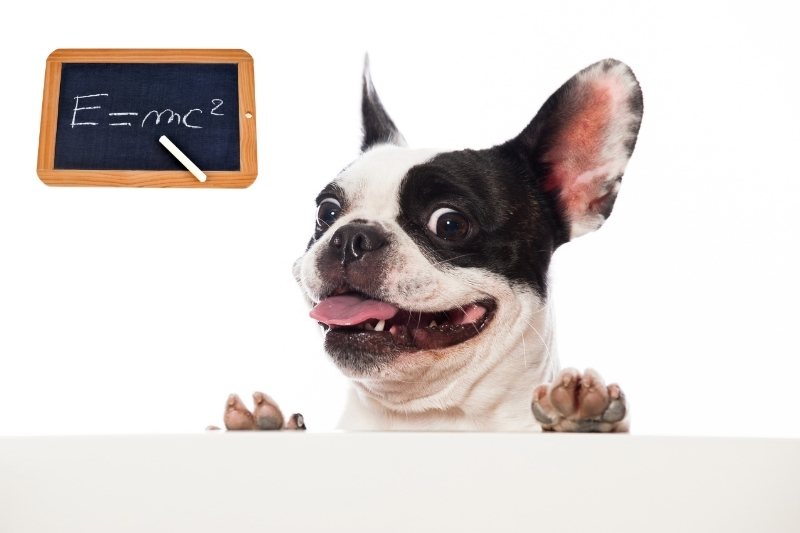 French Bulldogs are hard to beat when it comes to cute looks, with their somewhat squished in faces and their huge ears. They are also one of the most popular companion dogs worldwide. But just how intelligent are French Bulldogs?

Their small size, receptiveness to obedience training, and their reputation as a deeply loving dog made them a perfect companion for families living in urban settings. Like many other breeds bred and kept for companionship rather than a practical job, French Bulldogs developed independent problem-solving skills and became particularly good at getting what they want from their people.

How smart are French Bulldogs?

While the French Bulldog may not win in an intelligence contest with a border collie or a standard poodle, they are quite intelligent. According to the AKC, they rate at a four out of five in their trainability. However, they only rate at three out of five in their mental stimulation needs, which many people find to be an ideal balance. This is a dog who wants to learn, but won’t pester you all day for stimulation.

Coren Stanley's The Intelligence of Dogs only ranks the French Bulldog 109 out of 138 breeds, which does not sound very smart. However, many Frenchie owners take issue with the judgment of this list.

French Bulldogs may have an independent mind which makes them less likely to perform well on the tests used in this score than breeds designed to work directly with people like retrievers and herding breeds. This does not necessarily mean that the French Bulldog isn't intelligent.

They are excellent watchdogs, great companions, and have a high level of adaptive intelligence which enables them to live very well with people. Therefore, many Frenchie enthusiasts believe these to be very smart dogs, regardless of what the list may say.

This is a dog that wants to learn what you have to teach it, but won't constantly be pestering you for entertainment. French Bulldogs have a lot of instinctive intelligence and know how to keep their owners company better than many other dogs.

How to build French Bulldog intelligence?

If you're like most French Bulldog owners, you want your Frenchie to be as clever as they can be. While these friendly dogs are generally intelligent by nature, there are things that you can do to increase their intelligence.

Training your Frenchie to have good manners isn't just about obedience training. This skill set involves skills like leaving something they should not touch without having to be told to do so and showing good social skills around other animals.

To teach your Frenchie to be polite, consistently expose them to new situations and reward them for making the right decision. It can be tempting to physically restrain a small dog like the French Bulldog, but if you want your dog to develop manners, they need to build their own self control through positive reinforcement.

It's a very good idea to train your French Bulldog in basic obedience from the time they are very young. While this is not a highly active dog that needs lots of training, they will benefit from obedience training by becoming incredibly smart.

Teach your French Bulldog the basics like sit, stay, down, and all kinds of cute tricks to entertain your friends. You will likely find that your French Bulldog learns new commands very easily. Not only will you have a lot of fun training your dog in these things, but they will also become a better family member and more intelligent dogs because of it. French Bulldogs respond very well to food rewards and typically do best with short training sessions.

A great way to increase your dog's intelligence is to engage with them in dog sports. Keep in mind that French Bulldogs have a short snout and therefore are at increased risk of breathing difficulties when they are over-exercised or in very hot weather, so keep dog sports contained to cool weather or indoors in the air conditioning.

That said, these clever little dogs can do very well in agility, obedience, rally, and much more. Have fun looking for the perfect dog sport to compete in with your French Bulldog.

The French Bulldog is an affectionate breed that loves human companions both within the family and when meeting new people. It is fairly easy to take them all over with you, thanks to their small size.

You may be tempted not to do much with your French Bulldog since they are generally satisfied with playing in the house and a short walk every day. However, the more new experiences and socialization opportunities your Frenchie has, the more they will build their working intelligence. A dog with lots of experience is more likely to respond well to new experiences going forward and is also much more likely to have increased intelligence.

While French Bulldogs may not rank very highly in dog intelligent lists, Frenchie owners know them to be extremely intelligent even if they are sometimes free thinkers. The AKC backs up what owners know by indicating that these dogs are quite trainable. You will likely find that you think your French Bulldog is too smart more often than not.