It’s not that we’ve got too much time on our hands. We really are very busy creating content on how to best look after your dogs, different breeds, and the best doggie products available. But when someone showed us a picture of a magical world inside a giant tea cup and told us it was computer generated, well, we had to give it a go ourselves. Naturally, with dogs at the center of them.

After all, who doesn’t want to see the epic battle of Voldermort against a Cocker Spaniel or a surrealist portrait of Snoopy? Here are our beautiful (and sometimes a bit bonkers) AI-generated doggie artworks. Enjoy!

show
1 But first, what is AI-generated artwork?
1.1 Midjourney
2 Portrait of a Jesus Dog
3 Hachiko waiting for his owner in front of the Shibuya train station
4 Epic combat between Voldemort and a Cocker Spaniel
5 Marilyn Monroe as a dog
6 A dog camping next to a peaceful river, colorful drawing
7 Surrealist portrait of Snoopy
8 A happy dog eating ramen at a restaurant
9 A dog inside a fish bowl with seaweed and other fish
10 A dog made out of sand on a beach
11 A dog pharaoh style
12 Portrait of a Poodle mixed with a cat
13 A dog sleeping on a couch shaped like a cloud
14 A French Bulldog with a birthday cake
15 A happy dog in a supermarket in front of the dog food
16 A Labrador Retriever walking in heaven
17 A man and his dog walking in an ancient temple
18 Medieval portraits of a dog at a museum
19 A sad Golden Retriever goes to hell
20 Darth Vader is a dog
21 Impressionist painting of a dog reflection on the water
22 A dog stuck in an ice cube
23 A dog working on Wall Street
24 A Samurai Poodle
25 A seabed with dogs instead of fish
26 A very fluffy dog sleeping in a garden
27 Dogs protesting in the street
28 Dogs sitting at a bar at night having a drink
29 Manga drawing of a dog running in a city
30 Half Gollum, Half dog, in a dark cave
31 Hyperrealistic portrait of a Chihuahua
32 Mount Rushmore National Memorial with dog faces
33 Portrait of a dog, Picasso style
34 Portrait of a sad dog working at McDonald’s at night
35 School photo of a Golden Retriever
36 Surrealist and Psychedelic painting of a dog in a rainbow jungle
37 Wanted Poster of a dog
38 Yoda as a dog

But first, what is AI-generated artwork?

AI pictures are taking the internet by storm – for both the good and the bad. They can be incredibly beautiful and very funny but artists are split down the middle. The lack of real artistic input has left many questioning whether they can be considered art at all.

We just wanted to create a bit more doggie spam for you to admire. But what exactly is the process?

For our below pictures we used the website Midjourney. Midjourney is a Discord bot input generator, meaning you can join with Discord to make everything a bit easier. There are various threads you can look at to see exactly what other people are creating, and – more importantly – what words they’re typing in to generate their images.

In the ‘imagine’ box at the bottom, you can enter whatever words you want as inspiration for your picture. When we say whatever words, we really mean whatever words. You could type ‘sea with dogs instead of fish’ or ‘Darth Vader as a dog’ and you’ll only have to wait a few moments for your totally unique images to be generated.

And yes, those are examples we tried out.

Midjourney pulls from millions of images across the internet to create something completely one of a kind. Even if you type in the same words, it will produce something totally unique the next time around.

From the keywords you’ve entered, you then get four possible renders which you can choose to upscale or make variations of (that’s why there are a couple of versions of some of the ones in this article – we just couldn’t choose)! It really is that simple.

So, let’s have a look at some of the pictures Midjourney and our imagination have created. Which one is going to be your favorite?

Portrait of a Jesus Dog

If Jesus were a dog (and who’s to say he isn’t) he’d definitely look something like this furry friend!

There never was a better boy than Hachiko, who waited for 9 whole years in front of Shibuya train station for his owner to come back. The AI has perfectly captured this fluffy Akita’s wistful and patient look.

Epic combat between Voldemort and a Cocker Spaniel

EXPECTO PAWTRONUM! Or should that be Pawtrificus Totalus? Either way, if Harry Potter were a dog he’d definitely be an excitable yet brave Cocker Spaniel.

Marilyn Monroe as a dog

A dog camping next to a peaceful river, colorful drawing

One of the best things about AI-generated images is all the different styles they can come in. These blocks of color certainly suit this pooch’s beautiful markings.

Did you know Picasso lived with a Dachshund called Lump? Surely if he’d had a Newfoundland (or another furry breed with droopy ears!) his paintings would have looked something like this.

A happy dog eating ramen at a restaurant

Happiness is when the waiter finally brings over your bowl of ramen.

A dog inside a fish bowl with seaweed and other fish

There’s something so beautiful (and a little spooky) about this pup watching you. Especially with his bubble vision.

A dog made out of sand on a beach

If only we had a dog-shaped bucket.

That really is a Pharaoh Hound.

Portrait of a Poodle mixed with a cat

How incredible is the detail on this Catoodle?

A dog sleeping on a couch shaped like a cloud

How often have you looked for objects in clouds? We bet they never looked like this!

A French Bulldog with a birthday cake

This image is giving a whole new meaning to the word ‘Bulldog’. Is it just us, or has this little birthday boy got the eyes and nose of an angry bull?

Hands up if this is literally the face your dog pulls when you bring out their food? Maybe he’s thinking about the fresh dog food waiting for him at home…

A Labrador Retriever walking in heaven

A man and his dog walking in an ancient temple

This is what ‘a man and his dog walking in an ancient temple’ generated. Pretty accurate.

Medieval portraits of a dog at a museum 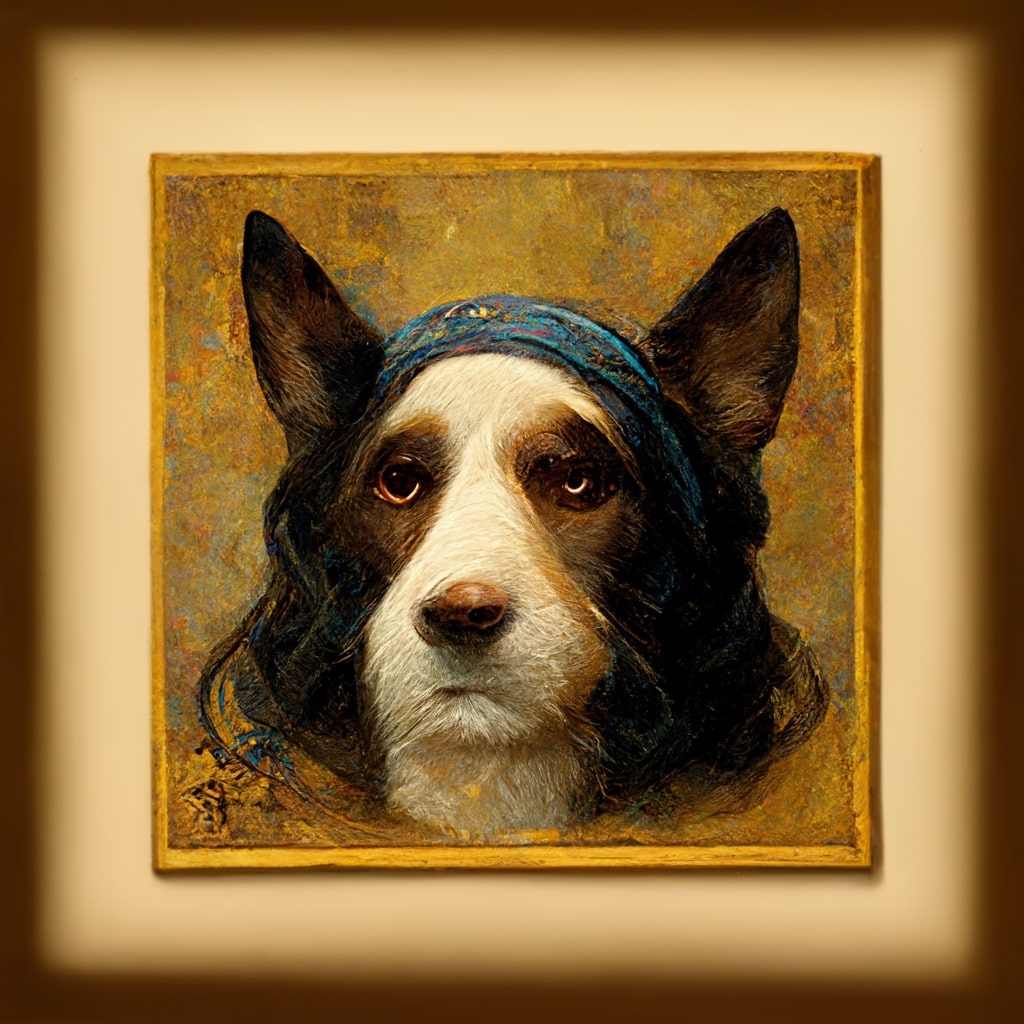 No way would a dog sit still long enough to have its portrait done. These are awesome, though!

Looks like someone wasn’t a good boy after all!

Darth Vader is a dog

Luke would have had a lot of questions.

Impressionist painting of a dog reflection on the water

A dog stuck in an ice cube

A dog working on Wall Street

If dogs had jobs to do (other than chasing their tail and protecting the house from the postman) which breed would be a banker?

Of course, a Poodle would be a Samurai.

A seabed with dogs instead of fish

We really had dogs being best friends with Nemo in mind. Not caught in a net. Guess we should be more precise with our wording next time!

A very fluffy dog sleeping in a garden

And for some reason growing very fluffy leaves for hair.

Dogs protesting in the street

Hey Hey. Ho Ho. The cat next door has got to go!

Dogs sitting at a bar at night having a drink

What would dogs talk about if they could meet for a beer?

Manga drawing of a dog running in a city

Half Gollum, Half dog, in a dark cave

“I would rather share one lifetime with you than face all the ages of this world alone.” – Arwen

She probably said that about a dog.

Hyperrealistic portrait of a Chihuahua

How incredible is the detail on this little Chi?

We think all dogs deserve their own special memorial.

Portrait of a dog, Picasso style

And this is definitely Lump.

Portrait of a sad dog working at McDonald’s at night

Even the smell of a big mac isn’t making this little guy feel better.

School photo of a Golden Retriever

This Golden Retriever is definitely the teacher’s pet.

Surrealist and Psychedelic painting of a dog in a rainbow jungle

How stunning are the colors in these ones?

Wanted Poster of a dog

He really wasn’t a good boy.

Yoda as a dog

‘Do or do not. There is no try’. Imagine if obedience training was that simple?

And there they are! Our wonderful, slightly strange, and unique AI pup pictures. Which keywords would you use to generate a picture? Let us know and we might even add our favorite suggestions!