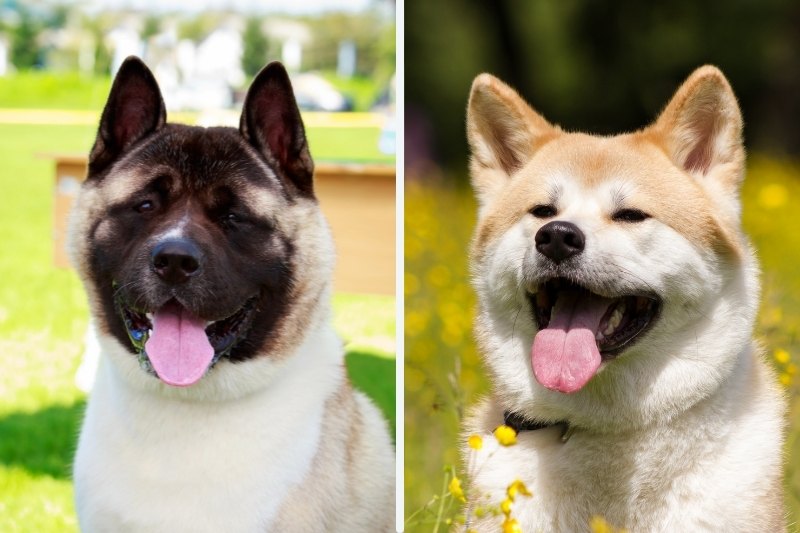 Akitas are large, powerful, and noble dogs and the 48th most popular breed in America.

But did you know that there are two varieties of the Akita dog? There's the American Akita and the Japanese Akita Inu. Their bloodlines are so different that they're considered two different breeds altogether in many countries.

But do they look the same? Do both Akita dogs have the same temperament? We've compared the American Akita vs Japanese Akita Inu so you can decide which of these pups is best for you.

Akita Inus were originally bred in the mountains of Japan as strong, fierce protectors and hunters. Their large, muscular bodies meant they could even hunt game such as bears!

However, their natural stature meant they were also bred as fighting dogs, which is why it's so important to make sure you get your Akita puppy from a responsible breeder who's aware of possible aggression in the breed.

In 1931 the Japanese government awarded the Akita breed with the title of ‘natural monument,' and they still have symbolic meaning today. In many regions, they represent health and happiness.

Japanese Akitas have long been beloved pups in the country, but their numbers naturally started to decline in the early 18th century. At the end of WWII, their numbers were so low that people began to make a conscious effort to try and save this breed.

The first Akita was brought back to America from Japan by Helen Keller in 1937.

She was presented with an Akita puppy during a tour of the country.

During WWII, many soldiers saw how solid and unusual-looking Akitas were and brought them back with them to the U.S.

They specifically chose the largest and most ‘bear-like' ones to impress.

In 1935 the American Kennel Club established a breed standard for these dogs, but it wasn't until 1973 that Akitas were admitted into a show classification.

Most of us wouldn't necessarily know if the pup we saw on the street was a Japanese Akita or an American one.

There are, however, a few differences between the two varieties which can make it easier to identify them.

Size of an Akita

Both American and Japanese Akitas are large and muscular dogs. The Akita Inu grows to be around 23-25 inches tall and weighs between 70-120 pounds.

However, the American Akita is a little bigger and can grow to be 26 inches tall and weigh between 70-130 pounds.

One of the best ways to tell the difference between American Akitas and Japanese ones is to look at their heads. Akita Inus have more fox-like features, and American Akitas look like bears.

Japanese Akitas have more pointy features (such as the snout) and a slightly smaller head, whereas American Akitas are boxier with a larger head.

Both American Akitas and Japanese Akitas are large dogs that look even larger due to their extremely fluffy coat. Both varieties have a short, double coat (so expect a lot of shedding), but some litters can have long-haired puppies due to a recessive gene.

The American Akita can also be these four colors plus black, silver, pinto, gray, brindle, and red. They usually have a dark mask on their face which the Akita Inu doesn't always have.

The Japanese Akita will usually have the iconic tightly curled tail that many of us associate with this dog breed. It's large, fluffy, and can curl onto the dog's back.

The American Akita, however, may have a less tightly curled tail.

Both Akita varieties have triangular ears, but the American Akita's ears may be a little more pointed, and the Japanese Akita's ears can sit further forward.

They both have beautiful and very endearing eyes, but an Akita Inu will have almond-shaped ones (which can look a little Huskyesque), and an American Akita will have smaller, deep-set eyes.

Both the Japanese Akita and the American Akita are pretty similar when it comes to temperament.

Akitas were first bred as hunters and guard dogs, which means they tend to be quite independent dogs that don't mind their own company.

These dogs are alert, confident, and can be a bit aloof around people they don't know (which makes them excellent guard dogs).

Because they tend to have an independent streak, it's essential to socialize Akita puppies from a young age. They need to spend plenty of time around other pups and humans to minimize the risk of them becoming shy and even aggressive.

Their independence can also make them difficult to train, and some even describe Akitas as stubborn. However, with the right training and a firm owner (so not an ideal breed for novices), these dogs can be exceptionally loyal and well-behaved.

Although aloof and shy around new people, both the Akita Inu and the American Akita develop very strong bonds with their family members. As far as dog breeds go, they're one of the most loyal companion dogs you can find!

When it comes to the American Akita vs Japanese Akita, something to think about is how they differ in the AKC show.

The temperament of an American Akita is measured more heavily than a Japanese Akita. For example, aggressiveness or extreme shyness are disqualifying traits for an American Akita, but they're only considered faults for an Akita Inu.

Price of an American Akita vs Japanese Akita

A purebred Akita dog will cost between $800 and $2000, regardless of which variety you get.

As with all other dogs, you must do your research and get your Akita from a responsible breeder. Because of their history, some dogs can have an aggressive tendency, so you need to make sure your breeder is aware of this and doing everything they can to breed this trait out.

Ideally, try to find a breeder that's part of an Akita club, as this usually ensures they're regulated and are aware of modern breeding practices.

Both the Japanese Akita and the American Akita need moderate amounts of exercise.

They're large dogs and will be happy with a good walk or run around the local park. As with all big dogs, it's important they don't exercise too much until they're fully grown and avoid exercise where they need to jump. Too much too soon could lead to joint and bone problems later on in life.

Because they're used to roaming and protecting property, Akitas are happiest when they have a backyard to play in. They're not ideal apartment dogs.

As you can imagine, by looking at these fluffy pups, they require a bit of grooming.

Because of their double coats, Akitas shed a lot, so you'll need to brush them regularly (especially when they blow their coats). At these times during the year, it's best to brush them outside as there will be quite a lot of hair flying about!

Both a Japanese Akita and an American Akita have dirt repelling, waterproof outer coats, which means they only need washing if they are particularly dirty (like if they roll in something).

You should also make sure their ears are kept clean and dry to prevent infection and clip their nails when necessary.

There are barely any differences between the health of a Japanese Akita and an American one.

Both suffer from conditions such as bloat (so feeding them smaller portions throughout the day is better), hypothyroidism, progressive retinal atrophy, and hip dysplasia.

Ensuring they maintain a healthy weight and regular check-ups at the vet can help to make sure your dog is as healthy as possible!

So really, when comparing the Japanese Akita vs the American Akita, the main difference is in their appearance.

Which variety do you prefer? Why?