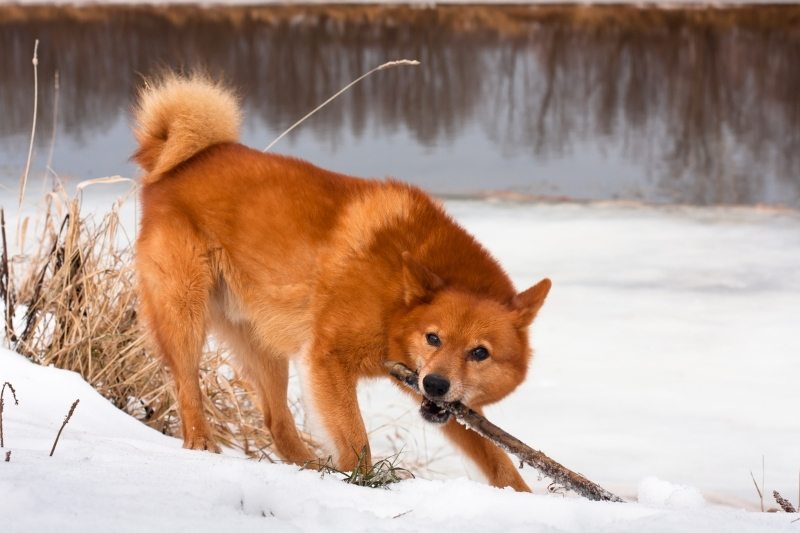 Have you ever looked at a dog and thought, is that a fox or a dog? Dogs are so unique with their quirky qualities and distinct looks.

It's by no surprise that there are dogs that resemble other animals. One of the most common animals dogs look similar to is a fox. Most of the time, it can be due to their coats, size, and characteristics.

Native to Iceland is the Icelandic Sheepdog. This beautiful breed is one of the world's oldest and a incredibly rare one. It's believed that this dog came to the country with the Vikings in their ships.

They look similar to a fox because they have short or long-haired reddish/orange colored coats with white markings. Plus, their face is narrow, just like a fox, have upright ears and bushy curly tails.

They are incredibly active and require rigorous exercise each day. They also have an inquisitive nature and are always alert.

The Shiba Inu is a popular dog found all over the internet as it's subject to many memes. Other than memes, this breed comes from Japan. They used to be bred to hunt large game and endure many mountainous regimes. Like a fox, this breed is medium size.

They tend to have four coat colors: red, sesame, and cream black and tan. The most common colored Shiba Inu has the red coat, which often gets mistaken for a fox. This breed tends to be fearless, alert, and independent too. Because of this, they can adapt to most environments, whether it be an apartment or a farm.

Coming from Finland is the Finnish Spitz believed to be brought from Russia by tribes. Their prime purpose was to be used as a hunting dog for squirrels, rodents, and bears. This breed looks like a fox due to its famous red color coat and square build.

This breed has a habit of barking when they choose to, so they need to be trained early to stop this. Similarly, because they require a large amount of exercise, they aren't suitable for people who live in an apartment. They need a big backyard to run around in and have regular daily walks.

One of the unique things about the Canaan dog is that no one knows how old this breed is! The Canaan dog is also known as the Bedouin Sheepdog and Palestinian Pariah dog.

It originates from the middle east and is commonly found in Jordan, Israel, Lebanon, Egypt, Iraq, Syria, and the Sinai Peninsula. Today this breed is widely used in the Israel army and is the country's national dog.

If you're a first time dog owner, this is not the breed for you; they require frequent and ongoing socialization to become friendly with other animals. They have high intelligence but are also very independent, making it challenging for them to be trained.

The similarities they have to a fox are a bushy tail, pointy ears, a lean build, almond shaped eyes, and a red/orange-ish coat with white markings.

The Basenji is a hunting dog that comes from the Democratic Republic of Congo. A cool quality about this breed is that they use their sight and scent for hunting down animals.

You can find this breed shown in many ancient Egyptian artifacts and other types of art. Later, they became popular as they spread to America in the 1900s.

Their coat resembles similar colors to a fox, such as red, brown, and orange but can also come in black, brindle, tan, and tricolor. On the contrary, they have a muscular body with a short tail, a wrinkled forehead, and an athletic nature.

As the name suggests, the Pembroke Welsh Corgi comes from Wales in the U.K and is a favorite dog of the British queen. They were initially bred to herd horses, sheep, and cattle; however, today, they're more of a lap dog.

Unlike a fox, they're a small breed, only standing one foot tall at the shoulder and weigh up to 30 pounds at the most; however, they can be easily mistaken for their litter.

The most common color is fawn with white markings, but they also come in colors such as red, black and white, sable, black and tan. They have a playful temperament and are smart dogs. They can be stubborn and challenging to train because of their high intelligence if there's no reward or food involved.

Looking like a small black fox, the Schipperke came from Belgium and was originally bred to herd livestock, hunt game, and guard shipyards. It has a life expectancy of 13-15 years and costs on average $700.

They weigh between 6.6-20ibs and can grow up to 12 inches in height. The Schipperke also comes in different coat colors from blue, apricot, tan, chocolate, and cream.

Moreover, they have a curious nature, and they are happy to go off on their own with confidence and explore any surroundings. Even though they like to be independent, they love people, too, so training can be a bit of a challenge.

A descendent of the German Spitz is the Japanese Spitz which first became popular in Tokyo in the 1950s. They were bred to be a little companion dog that is loyal, smart, and friendly.

They look like a fox due to their white coat, which resembles similarities to an Arctic fox. They're a small to medium sized breed reaching up to 13 inches in height and weighs between 13-22 pounds. This breed is family friendly and has an incredibly playful nature.