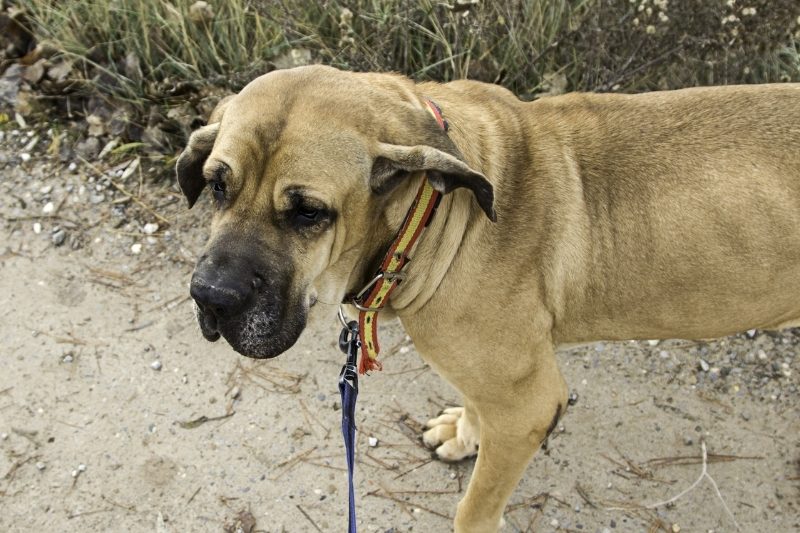 If you're thinking about animals in Brazil, you’re probably imagining jaguars, piranhas, sloths, and poison dart frogs. Dogs don’t exactly spring to mind. But there are many amazing breeds native to this incredible country. Some have spread out across the world and others are more commonly found in Brazil. How many of these 8 Brazilian dog breeds do you recognize?

The Fila Brasileiro is a pretty rare dog breed native to Brazil. It’s easily recognized by its enormous size, strong body, folds of thick skin, and distinctive topline (the side profile along its spine). Most dog breeds have a flat topline and some dogs, such as the Afghan Hound, have an arched line. The Fila Brasileiro, however, has a distinctive topline in which the croup (buttocks) are higher than their withers (shoulders).

The Brazilian Mastiff was first bred as a guard dog to protect plantations and farms. Their sheer size and intimidating look were enough to deter most thieves! This breed was later used for hunting and holding large prey (such as jaguars) before their owners could arrive.

Although pretty fierce-looking and a bit wary of strangers, Fila Brasileiros can be really loving and gentle creatures around their families. They’re very loyal, which can make them protective around their humans too. Early socialization and training are a must with this big dog breed if they’re not to be too protective and potentially aggressive.

The Brazilian Terrier is a charming, medium-sized dog with a big personality. They’re very friendly, alert, curious, and love to be around people. They make wonderful pets for households with children as they're happy to spend all day playing and running after a ball.

They’re always tri-colored dogs (white, tan, and black – although blue and brown are also accepted). They have thick, dense fur which is, unfortunately, also called rat fur. Despite its name, a Brazilian Terrier’s fur is sleek and very attractive.

They’re highly intelligent pups that are not afraid to bark if they’re uncomfortable or suspect something. They enjoy training and need to be kept mentally entertained if you want to avoid destructive behavior. Although very sociable and great around other dogs, they do have quite a high prey drive and may chase after smaller animals.

The exact origin of this Brazilian dog breed isn’t 100% known. Some believe it’s a descendent of the (now extinct) Old English Bulldog and others think it’s a mix of the old Portugues dog breed the Terceira Mastiff. Both came across with the Europeans when they conquered South America.

Looks may be a little deceiving with this pup. Their strong, muscular and somewhat intimidating body makes you think they could be aggressive. But truth be told, they’re softies at heart. They’re calm, loyal, and very affectionate family members. If socialized early on and trained from a young age they can be brilliant around children and other pups too.

The Campeiro Bulldog was originally bred to herd cattle on farms. They love to run, be put to work, and explore their environment. They need a good amount of daily exercise and won’t do well if they’re made to live in an apartment. A good garden to run around in is ideal for this pup!

Like most Collies, the Brazilian Gaucho Sheepdog is a highly intelligent, agile pup that has slightly longer hair than the Border Collie. They come in many different colors and are a really popular dog breed in Brazil.

Like all Sheepdogs, they were originally bred to herd cattle and sheep. They love to be put to work and excel when there’s a job to be done. Training these pups can be a really fun activity and they’ll really enjoy it. Unlike Border Collies, they’re more likely to bark and will nip more easily when herding.

These Brazilian dogs make wonderful family members that are very loving, get on well with children, and will be happy to go on long walks and runs with you.

These large dogs are muscular working dogs that are actually very rare in Brazil. They’re a cross between a male Bull Terrier and a female Boxer and have inherited traits of both these beloved breeds.

Despite their muscular appearance (there’s a theme in Brazil!), these are docile dogs that can be really loving towards their family. They’re highly attentive and are natural-born guard dogs but can work in many different roles. They’re obedient, loyal, and will excel when trained.

Although affectionate around those they love, Brazilian Dogos are not known for being particularly playful, so are not best suited for a house with young children.

These cute pups are often confused with the Campeiro Bulldog but they are two separate Brazilian dog breeds. They do, however, look quite similar. Mountain Bulldogs are descendants of Old English Bulldogs, Terceira Row, and a few other breeds that originated in southern Brazil.

They were first bred as working dogs and are brilliant herders. They also excel when guarding livestock and love to have a job to do. They need regular, daily exercise to keep their working instincts in check.

Even though they’re muscular pups, they are affectionate, caring, and actually pretty docile. They won’t be aggressive unless there’s really a reason to be. They make great members of a family and will be very loyal to their humans.

The Rastreador Brasileiro is a fantastic hunting dog, bred specifically to corner large animals (such as jaguars), hunt in difficult conditions, howl, and be exceptionally loyal to their owners. They have a fantastic sense of smell, are very agile, and have good stamina.

They’re large dogs that have big, floppy ears and are usually mainly white with flecks and spots of tan, black and brown. They’re lively dogs that are non-aggressive, loyal, and affectionate towards their family members. When socialized well, they get on with other people and dogs.

The Pampas Deerhound is a hunting dog that can also be found in Argentina and Uruguay. As their name would suggest, they were first bred to track, chase, and capture deer. Nowadays, however, they’re also the preferred dog for those hunting many other animals.

These Brazilian canines are patient dogs (thanks to their hunting nature) but this quality also translates into their relationships with humans and other dogs. They have a well-balanced temperament and can be affectionate with their families. They're much more reserved around strangers and can be distrusting. It’s really important that these pups get a lot of regular socialization so they don’t become unfriendly.

How many (if any!) of these Brazilian dog breeds did you recognize? Let us know below!