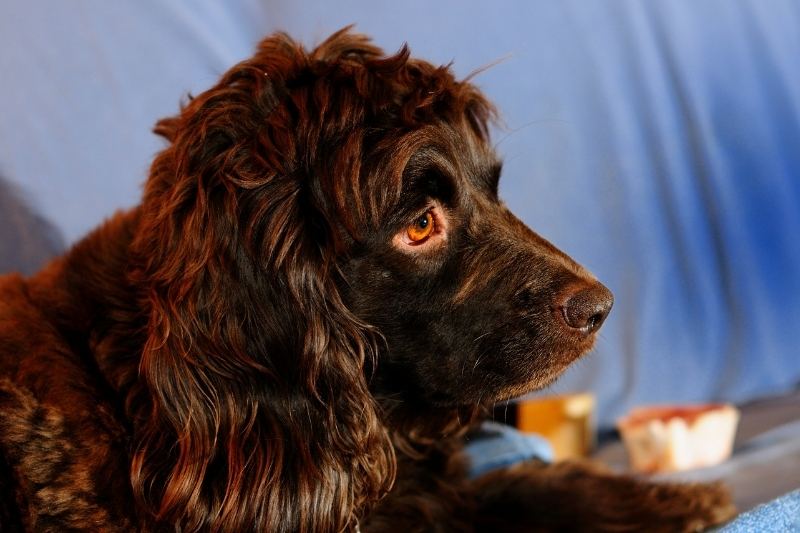 Amber eyes dog obsession makes perfect sense. Dogs with eyes that are this color are striking and have a way of pulling you in. If you are infatuated with dogs that have amber eyes, here are some breeds that you won't want to overlook.

The Anatolian Shepherd Dog is an incredibly impressive-looking dog with a very light coat and dark brown or black on the muzzle and ears. They tend to have amber eyes which stand out sharply in their dark face.

This breed is a livestock guardian of substantial size, typically weighing around a hundred pounds and often weighing up to 140 lb.

The Chesapeake Bay Retriever is relatively unusual compared to many other retrieving breeds like the Golden Retriever or Labrador. They are typically born with blue eyes which change to amber or a yellow-green color as the dog matures.

These dogs have a distinct curly coat and a solid build. They are intelligent and highly trainable like most retrievers, but also tend to be a lot more protective than the average retrieving breed.

The Irish Water Spaniel is an endlessly good-looking dog whose amber eyes vary between very light amber and dark brown eyes. The curly hair is always a rich chocolatey brown.

The Australian Shepherd is a very popular dog known for being extremely trainable and intelligent. They come in a range of striking colors and are known to have sky blue eyes, amber eyes, and often a mix of the two.

Australian Shepherds are often merle with blue eyes, but they may also have dark brown pigment in their coats. Black pigmented dogs with a white blaze and tan points are common as well.

The Curly-coated Retriever isn't often seen and is easily mistaken for a Poodle or a Poodle Retriever mix. This is a very old and decidedly tall retriever breed that has an appearance somewhere between a Standard Poodle and a Labrador.

Their eyes may be dark brown or amber and the coat can be either black or brown. This dog's eyes may be especially likely to stand out since the hair is straight on the face.

The Pharaoh Hound is a unique dog originally bred to hunt rabbits and other small prey. They are distinctive due to their long velvety ears which stand straight up, the tannish red coat, and their distinct almond-shaped vivid amber eyes.

The Pharaoh Hound is slight in build like most sighthounds, but they are quite tall, typically standing as high as 25 in. This is an amazing breed characterized by their active, playful personality.

These dogs come in a wide range of colors from light cream to black. They almost always have white markings on their chest and face. Merle dogs often have what is known as a butterfly nose, which is a nose characterized by various colors, as well as blue eyes or eyes that are otherwise lighter in color.

The American Hairless Terrier is a very unusual breed that isn't often seen, but it is a wonderful family pet that is better suited to allergy sufferers than other breeds. They were developed from Rat Terriers which were born hairless naturally.

They come in a wide range of colors, the dilute forms of which such as blue or Isabella are often characterized by amber eyes. They often have speckles on their skin, adding to their unique appearance.

The Boykin spaniel is a beautiful little dog sized conveniently at between 30 and 40 lb. They have a gorgeous dark brown coat colour which looks especially striking with the lighter eyes.

They have a beautiful curly coat that is smooth on the face, giving them a truly huggable appearance. These dogs are known to be very friendly and easy to get along with, as well as being quite intelligent and trainable.

The Vizsla is a unique breed that has a very distinct look thanks to the light tan coat and the light eyes. They tend to have darker eye rims, which really makes the eyes pop.

While this is a sporting breed made to aid in the hunt, they are just as likely to appear as oversized lap dogs, thanks to their extremely affectionate nature. These are loyal dogs that are beloved by their fans.

What mixed breed dogs are most likely to have amber eyes?

Both blue and Isabella are due to the very diluted pigment which makes black dogs blue and liver dogs Isabella, or lilac. The same gene that results in the dilute coat colors also dilutes the eye color, resulting in amber eyes.

Merle dogs are also very likely to have amber eyes. They may also have solid blue eyes. Sometimes they will have one eye of either color. In some cases, the merle gene can cause different colors within the same eye. Even very little visible merling can result in light amber eyes.

Amber-eyed dogs can truly be very striking. If you have your heart set on a dog with this kind of eye color, you'll be glad to know that there are plenty of purebred and mixed breed dogs for you to choose from.