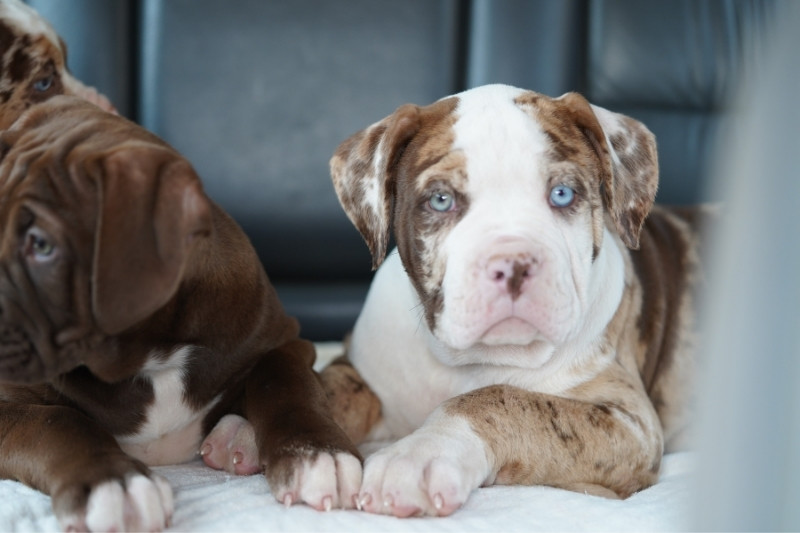 Merle Pitbulls are becoming ever more popular amongst dog lovers. And with good reason. They're very striking and a totally unique-looking pup. But there is certainly some controversy over the merle Pitbull and the breeding practices that surround them.

Should you get a merle Pitbull? Are merle dogs genetically healthy? Here's what you need to know about these popular pups.

What is the merle gene/coloring?

Merle is a genetic pattern that can alter a dog's coat color. It creates mottled patches on a piebald or solid coat color that can look completely unique. Even though the merle gene can affect a dog with any coat color, the colored patches on a pup will be red merle or blue merle.

The appearance of a merle coat can be quite patchy and a mixture of fully pigmented areas with diluted parts. In some dog breeds, the merle gene is quite common. Catahoula Leopard Dogs, Australian Shepherds, Carea Leonés, and Shelties can often have this distinctive coat pattern.

As well as changing the coat color, the merle pattern can also affect the color of the skin and create the iconic bright blue and odd-colored eyes we associate with a merle dog.

What's all the controversy around the merle color pattern?

Although very striking and certainly very beautiful, there's quite a lot of controversy around the breeding of merle puppies. The merle gene can affect your dog's eyesight and hearing.

Two dogs that both have the merle gene should never be bred – and most responsible breeders know this. A quarter of all puppies born to merle parents (known as double merle puppies) suffer from serious eye and hearing problems.

That sounds pretty easy, right? Don't breed two dogs with the iconic merle coloring. The problem is that some dogs are cryptic merles. This means they carry the merle gene but don't have the distinctive colorings or markings of a merle dog. That's why it's really important that breeders test their pups before breeding merle dogs.

How can you tell the difference between merle and brindle coat patterns?

Whereas merle tends to look more like a ‘faded' color mixed with stronger pigment, brindle looks almost tiger-like. Brindle Pitbulls normally have a brown coat with black stripes. Brindle pups can either have a uniform coat pattern or just patches of brindle.

It's not just the breeding practises around merle Pitbulls that creates controversy. There's also a lot of confusion about whether the color is natural and if it should be accepted by various Kennel Clubs. This is mainly down to the fact that many people confuse Pitbulls with other breeds of dog.

If you look at the breed standards for the United Kennel Club, they don't allow albinism or merle in Pitbulls. They also don't allow merle coloring for American Bullys (a breed often confused with Pitbulls).

The American Kennel Club, however, doesn't accept the American Pit bull Terrier as a breed at all. It only accepts the (similar) American Staffordshire Terrier. Confused yet? Well, the AKC accepts the Staffy in all patterns and colors.

The American Dog Breeders Association also doesn't recognize merle Pitbulls. Their decision is down to the fact that merle Pitbull puppies can have significantly reduced hearing and vision, especially double merle pups.

Appearance of a merle Pitbull

It's important to remember that merle Pitbulls aren't a different breed from regular Pitbulls, they just have a genetic mutation. This means that these pups will still look like other Pitbulls, but their coat color will be different.

Merle Pit Bulls are medium-sized and weigh between 30 and 60 pounds. They can grow to be between 15 and 21 inches. Like all purebred Pitbulls, they have a strong and stocky body, with a boxy head and broad shoulders. They can be quite intimidating but don't let that put you off!

As with its physical appearance, the temperament of a merle Pitbull won't differ from that of a purebred Pitbull.

Many people think that Pitbulls are aggressive dogs that are naturally violent. But that is generally not true. As their name suggests, Pitbulls were originally bred to fight bulls and other animals in a pit. This association, plus years of unethical breeding, has led people to believe that Pitbulls don't make great pets. But they do.

American Pit Bull Terriers can be extremely friendly and affectionate towards their family members. With good training and socialization (which all pups need) they can be very kid and other pet friendly. Despite their muscles and strong muzzle, these dogs are complete softies.

Health of a merle Pitbull

If responsibly bred, a merle Pitbull shouldn't have any more health problems than other dogs. Double merles, however, can suffer from extreme eye problems such as night blindness, missing eye tissue, inability for pupils to dilate, and total blindness. They can also be born deaf.

Merle Pitbull pups (as well as non-merle Pitbulls) can also suffer from hip dysplasia, skin irritation, allergies, hypothyroidism, and knee problems. In general, though, the Pitbull breed is a relatively healthy dog breed.

How much exercise does a merle Pitbull need?

Pitbulls are active dogs and need a good amount of exercise to satisfy their energy levels. Try to give your pup 1 to 2 hours of exercise a day, which can include walks, playtime, and a trip to the dog park. Pitbulls are also intelligent and sensitive dogs, so try to make sure their brains are engaged through toys and training classes. A bored Pitbull is something you want to avoid!

How long do merle Pitbulls live?

There's no real difference between the lifespan of merle Pitbulls and Pitbulls with other colorings. The average life expectancy of a merle Pitbull is between 12 and 15 years.

Of course, lifestyle plays a big role and you should make sure your pup is getting enough regular exercise and is being fed a healthy and nutritious diet. Check-ups at the vet can help to diagnose conditions early and help to treat them.

Merle breeds used to be much rarer than they are now. With the increase in attraction for these pups, the number of breeders breeding them has also increased. Their popularity is another reason why it's so important to check the breeder and do your research to find well-bred merle Pitbull puppies.

Compared to other Pitbulls, merle-coated pups are rarer. But their numbers are increasing out of popularity.

How much do merle Pitbulls cost?

Merle Pitbulls are not cheap. In fact, they can be triple the price of their non-merle cousins. If you're looking to buy a merle American Pit Bull Terrier you can expect to pay $10,000 or more! They're very popular dogs and are still fairly rare compared to other varieties.

Should I buy a merle Pitbull?

That's really up to you. If you can 100% ensure that your pup's parents have been tested for the merle gene and that the breeder is ethical, then there shouldn't be a problem with buying a merle Pitbull.

The question is whether you can 100% guarantee this. Many think it's best to avoid supporting the distinct breeding of particular coat colors – especially if the consequences can be as devastating as those of double merle Pitbulls.

Merle Pitbulls are really popular dogs. As with other merle dogs, their unique genetics give them a particularly striking and beautiful look. It's really important, however, that these dogs are well tested.

A merle dog with two merle parents can suffer from a number of difficult health conditions. Some believe owning a merle dog is OK if they have been well tested. Others think it's best to avoid them altogether (unless, of course, you find one in your local shelter)!

What's your opinion about merle dogs? Would you consider getting one?