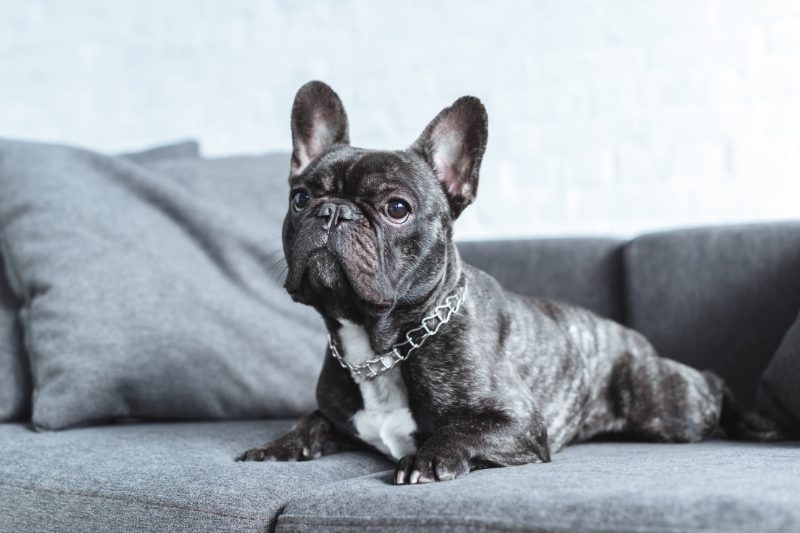 The French Bulldog’s large bat ears are one of the most distinctive characteristics of this adorable breed. You may find yourself wondering whether the French Bulldog’s ears need to be cropped or clipped into this charming shape or whether it comes naturally.

A French Bulldog’s ears stand up naturally. They do not need to be clipped, cropped, or taped in order to achieve this adorable shape. While French Bulldogs are born with floppy ears, their ears will stand up by themselves into the characteristic bat ear shape by the time the puppy is between 5 and 15 weeks of age. Often, one ear stands up before the other, but have no fear, eventually both ears usually stand up.

According to the breed standard for the French Bulldog, ears should not be cropped or clipped, but should stand up naturally. Even a purebred French Bulldog with AKC heritage and papers would be dismissed from the show ring if it had cropped ears. Therefore, there is really no motivation to crop a Frenchie's ears.

Generally, regular masking tape is wrapped around the base of Frenchie ears loosely. Then, another strip of tape is used to make a connecting bridge and keep them upright. The tape is typically left in place for about a week before you gently peel it off. If it doesn't work, the tape may be kept in place for another week.

When Might You See a Frenchie With Cropped Ears?

If you see what you think is a French bulldog with clipped ears, the chances are that you aren’t actually seeing a French Bulldog. Many other bully breeds that have a similar appearance to the French Bulldog do typically have cropped ears.

For instance, the Shorty Bull is a type of bulldog that is being bred down to a small size from other types of bulldogs. This is not a registered breed yet, but it is increasingly popular. These dogs often have cropped ears, but may otherwise look very much like a French Bulldog.

Another breed that often has cropped ears and can easily be mistaken for the French Bulldog is the Pocket Pitbull. This dog has been bred down from the American Pitbull Terrier and mixed with other breeds such as the Patterdale Terrier to result in a very small dog between 11 and 22 lb that looks extremely similar to the French Bulldog.

Why is Ear Cropping Done in Dogs?

Historically, ear cropping has been performed in fighting dogs. Ears bleed a lot and are easily ripped by another dog in a fight, but traditionally docked ears were less vulnerable to being grabbed and ripped.

Even though dogfighting is no longer legal, it is still occasionally done. Many people also choose to crop their dog’s ears for aesthetic purposes. If you want to show your dog, you may need to clip the ears in order to compete in the show ring, since it is a part of the breed standard for many dogs. Many people also believe that ear cropping prevents ear infections, although there isn't much evidence for this.

One of the cutest things about the French Bulldog is unquestionably the giant and adorable ears. You'll probably be very glad to know that you don't need to cut your dog's ears into this shape, but that they naturally develop in this way.