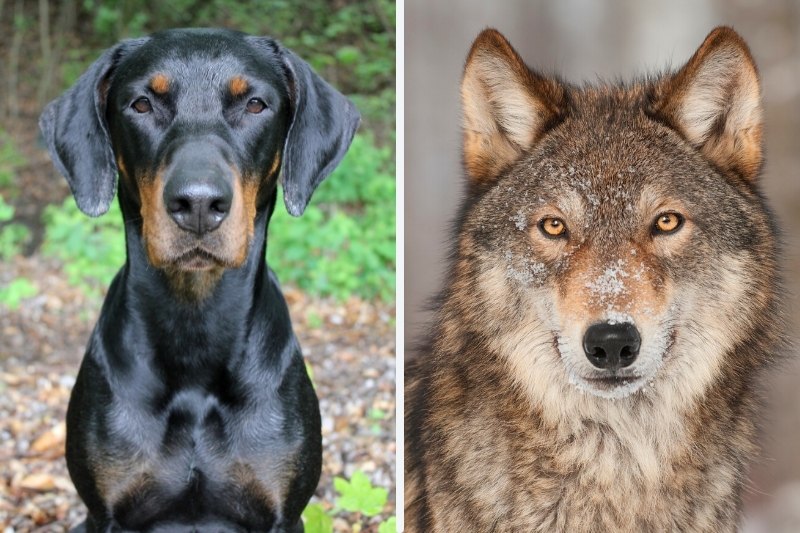 If you love wolf dogs, then today, you're going to have your mind blown by the stunning mixed breed, the Doberman Wolf.

However, just because the wolf Doberman mix is not recognized by the American Kennel Club (AKC) and placed in the hybrid dogs category does not mean we should not acknowledge it at Dogs Planet!

In fact, this epic wolf hybrid is truly unique as it's believed to have multiple dogs responsible for this bloodline.

To know more about this dog's parents and its temperament in general, carry on reading.

Who are the parents of this mixed breed dog?

To truly understand these designer dogs, we have to look at their parents. First of all, the Wolf Doberman mix has two parents, the Doberman Pinscher and the grey wolf.

He bred the Doberman Pinscher to have top strength, intelligence, loyalty, and aggression to help protect him as a guard dog when collecting taxes.

The Doberman Pinscher is also a mixed breed dog, so it can be linked to multiple parents. While the exact ratios of bloodlines and origins are still not entirely confirmed to this day, there are a lot of theories around its parents. Many believe that the parents of the Doberman Pinscher derive from several dog types such as the Rottweiler, Weimaraner, German Pinscher, and the Beauceron.

The Grey wolf is believed to originate from all over North America; however, by the time the mid-1930s came, it was thought that they had nearly got exterminated. Today you can find such wolves across Canada, Alaska, The Rocky Mountains, and the pacific northwest. Typically you will find them in packs working together to hunt prey and establish terrority. Most wolves have advanced communication systems such as barking, whining, growling, and howling.

Now looking at the parent breeds of this dog, can you guess the type of temperament it might have?

Generally, these dog breeds are very active and require multiple walks a day to help use up their energy levels.

In addition to this, the Doberman mix is also quite an intelligent hybrid and will require an equal amount of mental stimulation through mind games. Plus, a Doberman wolf mix is quite independent and likes to roam around, especially in a yard. Therefore, if you live in a small apartment or flat or don't have time to dedicate to this dog, this isn't the breed for you.

Moreover, due to their parent's ability to hunt and protect, these wolf hybrids are probably excellent guard dogs. Therefore if you need protection from strangers or just someone to look after you, you can most likely count on a Wolf Doberman mix.

One dog, in particular, that is good for this is the Doberman Labrador Retriever mix, also known as the Doberdor. Regarding their personality, though, it can be a bit unpredictable.

These dog breeds can easily inherit a variety of characteristics from either parent. They can be quite flighty and anxious around loud noises and unfamiliar people most of the time.

This often comes from their wolf side, as their parents like to stay quiet and on guard in the wild. There is also a likelihood that these wolf hybrids could inherit the aggression from their Doberman Pinscher parent; therefore, it's crucial they are socialized from an early age.

It can be quite difficult to state the exact dimensions of this wolf hybrid, but it's often somewhere around the same size as its parents. The Doberman Pinscher can grow up to 24-27 inches/61cm-69cm and can weigh between 60-100lbs/ 27-45kg. A wolf can grow up to 28 inches/72 cm tall and weigh more than 100lbs/45kg.

Looking at its parents, you can probably guess that this breed is quite large and heavy! In addition to this, they tend to have multiple unique markings consisting of black and tan on their cane torso.

The Doberman Pinscher mix's health problems does not tend to have a lot; if they do, it's most likely an inherited trait. One health condition they can be at risk of is bone cancer; therefore, if you plan on getting this breed, you must speak to a reputable breeder before buying.

If you're planning on buying a Wolf Doberman mix puppy, the cost can vary a lot based on where you're from, the puppy's availability, health problems, and the breeder's reputation. On average, though, you can expect to pay anything from $1500 and above for the arctic wolf Doberman.

Other types of Doberman mix

In addition to the Wolf Doberman Pinscher mix, there are a few other different types of Doberman and wolf hybrids you should know about, such as:

The Doberman and Rottweiler mix are dog hybrids also commonly known under the Rotterman. These tend to be a fairly large, strong breed that requires a lot of strength to be handled. They also do have some aggressive streak in them, but this large dog can be affectionate and loyal towards their owners for the most part.

On the plus side, the Doberman Shepherd is a highly intelligent dog and requires a lot of mental stimulation.

Like their parents, these German Shepherd hybrid dogs tend to have a muscular body growing up to 22-26 inches/56-66cm tall and weighing between 90-110lbs/41-50kg.

Overall, the Doberman mix is an interesting large dog breed to own, having the best characteristics from Doberman Pinschers and wolves. Due to both parents having a strong hunting instinct and curious nature, you must dedicate enough time to helping them exercise; they need a minimum of 90 minutes a day and a good backyard.

Also, due to their guard dog instinct, the Doberman mix can sometimes be a little aggressive if not trained well and socialized from an early age. If you feel like this might be too much for you to handle, other dogs might be of interest to you instead of the Doberman mix like the Manchester Terrier, Great Dane, Tan Terrier, and more.

Most importantly, if you are to get any dog, you must visit the breeder first, ask for proof of their parents' medical history, and know more about the puppy before buying.