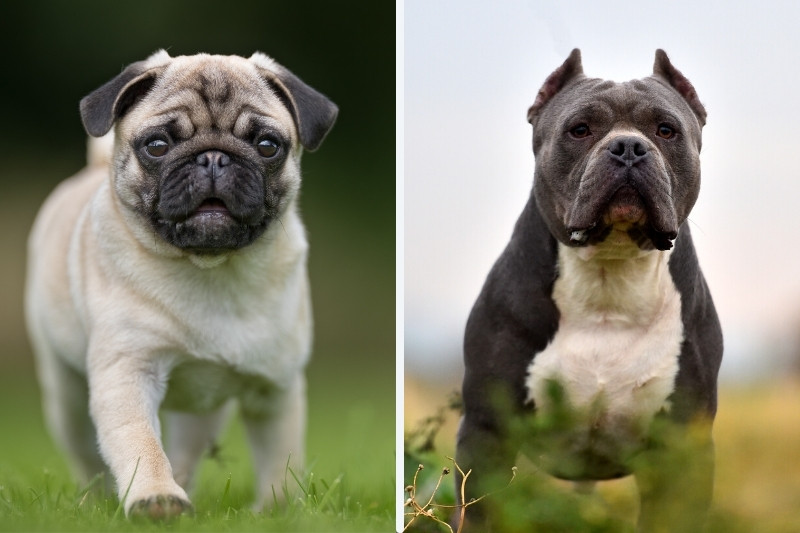 These charming, extremely cute, small dogs are a cross between the American Pitbull Terrier and the Pug. They love to play and are devoted to their families!

Quick overview of the Pugbull

Temperament of the Pugbull (or Pug Pit, Pug A Bull, and Pugbull Terrier)

The Pug Pitbull mix is an adoring and very loyal pup. They love nothing more than to spend hours playing with their family members. They enjoy being part of a pack and can be reserved around strangers. They're not naturally aggressive but won't hesitate to bark down anyone approaching who they don't like the look of.

The Pitbull genes can mean that your pup has a prey drive. Although not a huge problem, you'll need to socialize puppies from a young age and introduce them to other animals in the house very early on. If you adopt a Pugbull later on in its life, it's probably not a good idea to have cats or smaller dogs around too.

These dogs are also very intelligent. Their naturally curious nature, combined with this intelligence, means they're always busy looking for a way to entertain themselves (when they're not napping on your couch). Toys as well as lots of short, fun training sessions will keep them happy and engaged.

Although they're loving and fun to be around, these little pups aren't recommended for first-time or novice owners. They can have a stubborn streak which means they can be a bit head-strong. These designer dogs will benefit from obedience classes and plenty of interaction with you. Like most dogs, they respond best to positive reinforcement.

The appearance of your Pitbull Pug puppy will really depend on which of the parent breeds they take after more.

On average these dogs are smaller than their Pitbull Terrier parents. They can grow to be between 14 and 15 inches tall.

The Pug and Pitbull mix weighs between 25 – 30 lbs. Males generally weigh a little more than females.

Just like both Pugs and Pitbulls, this mixed breed can be a number of different colors. They can be fawn, red, blue, black, cream, and brindle. They may have darker markings around their nose and eyes (like a Pug). Their noses can be black, red, or blue.

The Pitbull Pug mix has a short, smooth coat that doesn't shed much.

Like both parent dog breeds, the Pitbull Pug mix has a strong, muscular, and stocky build. They might have button ears (ears in which the base is upright but the top half folds over) and a curly tail like a Pug's. They'll usually have large, almond eyes and a muzzle that's longer than the Pug's (but, usually, not as long as the Pitbull's).

Tips about the Pitbull Pug mix

Normally, a mixed breed is healthier than a purebred dog. The mix of genes means they're less susceptible to conditions that their purebred relations suffer from. That being said, Pugbulls can suffer from a few conditions common in both Pugs and Pitbulls. These include:

Although this designer dog has a longer muzzle than a Pug, it can still be affected by respiratory diseases common in Pugs. When adopting your dog, it's important you ask the breeder for a health guarantee to ensure they're as healthy as possible.

These dogs can live between 10 and 12 years of age. Genes, as well as lifestyle, will have an effect on how long they live. It's important to feed them good-quality food, exercise them well, and take them for regular checkups at the vet.

Although not considered hypoallergenic, these dogs don't shed a lot. Brushing them twice a week should be enough to keep most of it under control. Only bathe them when needed and make sure their ears are kept clean and dry to prevent infection.

Not much is known about exactly when this mixed breed was initially bred. Of course, they could have been around way before they were first recognized thanks to natural breeding. It's best to look at the history of Pugs and Pitbulls to really understand this breed.

History of the Pug

According to the American Kennel Club, Pugs have been around for over 2000 years! Flat-faced dogs were developed in China because they were known to be the favorites of Emperors. They were treasured canines and were often given as gifts.

In the 1500s, Dutch traders brought the first Pugs back to Europe. Their unique look, accompanied by their endearing personalities made them popular lap dogs in many noble houses. After the American Civil War, Pugs were taken to America and they were first recognized by the AKC in 1885. Today, they're the 29th most popular breed in the country!

History of the American Pitbull Terrier

As the name suggests, these dogs were first bred for sports such as bull and bear-baiting in England. In 1835, however, a law was passed deeming these sports inhumane, and so these dogs were bred to fight each other.

When these dogs were taken to America, they were used for all-round farm work. Breeders and owners quickly noticed that they were caring, loving, and protective dogs and that they made excellent family pets.

Unfortunately (and this is still true nowadays), unethical breeding meant these pups were sometimes bred to be aggressive.

In 1936, the first Pitbulls were recognized by the AKC. The organization, however, changed the breed's name to American Staffordshire Terrier to distinguish them from their fighting past.

These mixed dogs are great family pets. They're loyal, fun, loving, and playful. They're a cross between two popular breeds and inherit some amazing traits from both of them. They can be stubborn and need a strong leader, but with that, they make wonderful companions.

Do you have a Pug or Pitbull mix? What are they like?