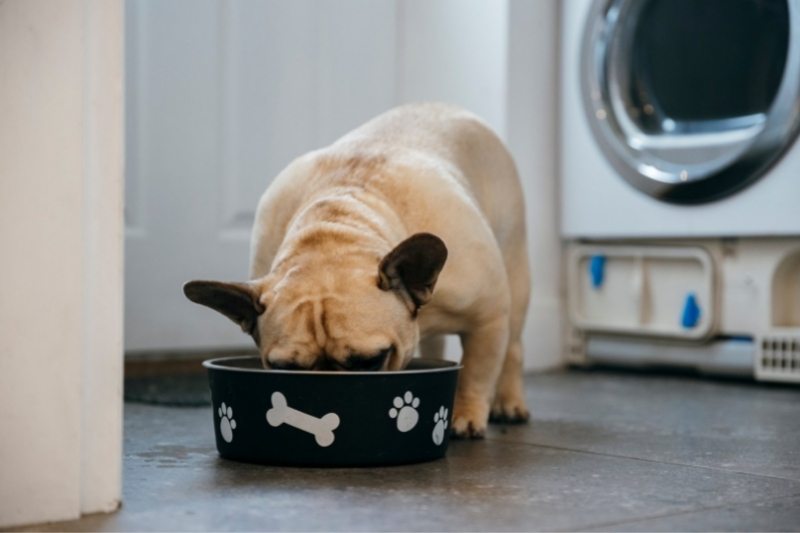 French Bulldogs are very good at getting what they want from their people, and that includes some extra food. However, over-feeding your French Bulldog can be very dangerous, resulting in health problems. Here's what you need to know about how much to feed your French Bulldog to keep them healthy and happy.

How much to feed French Bulldogs?

How much your French Bulldog should eat depends on their size when they are at a healthy weight and how energetic they are. In general, French Bulldogs aren’t considered particularly energetic dogs.

That means that you won't feed your French Bulldog as much as you would feed more energetic small dogs of the same healthy weight, such as a Jack Russell Terrier. Of course, if you have an unusually energetic French Bulldog, you may need to feed them more.

To determine how much food to give a healthy French Bulldog, take their weight in kilograms and raise it to the ¾ power by 70. For instance, an average French Bulldog of about 22 lb would have the following formula: 70(10kg)3/4 ≈ 400 Calories/day. However, a number of factors go into this formula:

How many cups of food should I feed my French Bulldog?

Lower than 350 calories per cup is a good idea. This way, your 22 pound French Bulldog will be able to eat at least a cup of food a day. Any less than that, and your French Bulldog may still feel hungry even when they have had as many calories per pound as they are supposed to.

How to stretch out French Bulldog feeding?

Most French Bulldogs have a seemingly natural hunger that is almost insatiable. You are very likely to find that your French Bulldog tries to eat other pet’s food or begs even after they have been given their meal. Here are a few tips to help keep your Frenchie satisfied:

Give your French Bulldog a healthy amount of food

It can be very tempting to give your French Bulldog as much food as they want. After all, this breed is a master of the mournful puppy eyes. However, feeding your dog too much can result in serious consequences for their health, so it is very important to stick to the rules and only give your French Bulldog as much as they should have. Remember that healthy and filling treats like green beans are a great way to round out their diet.