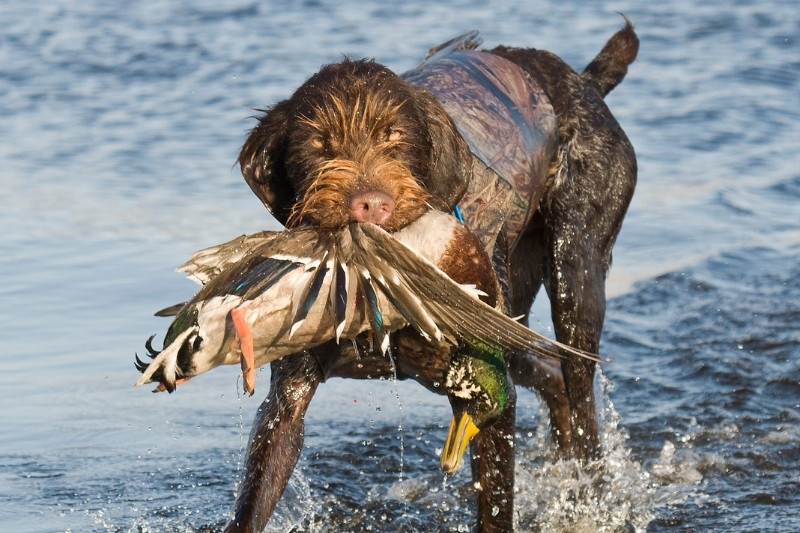 Hunting dogs were some of the most common breeds when many purebred dogs were being developed. Duck hunting dogs and dog breeds were initially bred to bring back ducks and other prey unharmed after their owners shot the animal.

Luckily, loving these duck hunting dogs isn't exclusive to duck hunters, and many of them need pet lovers to be prepared for their high energy, complete lack of a thin coat, and need for stimulation.

The first duck hunting dog to come to mind when compiling a list of the best duck dogs is the Labrador Retriever breed. They were originally bred to bring the prey back to their owner during waterfowl hunting sessions. In addition, they just made great family dogs because of their boundless love and affection for people.

After all, there's a reason why the American Kennel Club lists this incredible water dog as America's most popular breed.

The lovable Golden Retriever is likely the most iconic and versatile dog breed in America. Thanks to their limitless loyalty and energy, they are the ultimate family pet.

In addition, the Golden Retriever is not too noisy, unlikely to disturb young children if they're in the middle of nap time. They even had a flash of internet fame when videos of Golden Retrievers carrying eggs in their mouths without breaking them became a sensation.

The trait is a carryover from their history of being waterfowl hunting dogs. When duck hunting, it's important to have dogs with soft mouths. It allows them to hold prey and return them undamaged.

If you want to adopt one of the retrieving breeds but don't want the happy-go-lucky, goofball nature of most Golden Retrievers and Labs, then the Curly Coated Retriever might be the perfect pup for you! They're still affectionate and love people, but they're a bit more independent and regal compared to other Retrievers breeds.

When used as hunting dogs, their thick and water-resistant coat makes them excellent hunters. Their coat is also less of a hassle to deal with when compared to other Retrievers, which have longer coats that require more frequent grooming and brushing.

The Flat Coated Retriever looks almost exactly like its Golden counterpart; only it comes in various colors instead of the distinct yellow of Goldies. They share the same height as the Lab, but they appear much more elegant with their silhouette.

Don't let that visual difference trick you, though. Flat Coated Retriever dogs are often known as the most immature Retrievers.

They're forever puppies and will likely never grow out of their rascal phase. They'll need to be kept busy and mentally stimulated. Each of the duck hunting dog breeds needs to be kept busy, but leaving a Flat Coated Retriever to its own devices is just asking for shoes to become chew toys.

Looking for a Retriever that has a somewhat sleeker coat than other dog breeds within its family but still has that thick coat you get with a Goldie?

A Chesapeake Bay Retriever might be the perfect duck hunting dog for you! It has a coat somewhat similar to the Labrador Retriever, but it's wavier and slightly oilier, giving it a sheen that other Retrievers usually don't have.

A Chesapeake Bay Retriever is also unlikely to welcome a burglar into your home. They're more cautious around strangers, and they can make a competent guard dog while still maintaining a Retriever's distinctive qualities.

They make great companion dogs to people who have the time to dedicate to giving them the rigorous physical exercise required to be completely fulfilled. They're the sort of dog to appreciate a lush forest property rather than a city apartment, where they might only visit a dog park weekly or so.

The American Cocker Spaniel is the ideal companion for those wanting a sporty dog but don't want a massive pup or lack the space to make bigger dog breeds happy. Of all dogs in the sporting group of dog breeds, they're the smallest!

Their size helps distract waterfowl as a duck hunting dog and then retrieve the bird once it has been killed. As a result, American Cocker Spaniels serve a dual purpose while assisting waterfowl hunters.

Their distinctive long coats imply everything you need to know about their grooming needs. They're grooming-intensive dogs, and they can mat and tangle easily. So, taking them to a groomer is vital, along with weekly brushing at home.

Although their names are nearly identical, few key differences stand between this breed of duck dog and the Cocker. The English Cocker Spaniel is slightly more energetic and affectionate. As such, you're getting a shadow that will follow you around and adore you endlessly.

They're amazing with other dogs and children. Because they're smaller dogs (though not as small as a Cocker), they can be lap dogs with no issue and good playmates for children of any age without any concern of the pup being rough around the kid.

Their hunting skills come from their ability to swim and retrieve game, while also distracting the prey and drawing it out of hiding, just like its relative the Cocker.

The English Springer Spaniel is slightly larger than both the English and the Cocker, standing at about 19 to 20 inches tall, and it, too, has the telltale coat of a Spaniel.

They are lovey-dovey to the extreme, requiring a family to give them a great deal of time throughout the day. If your family is out from early morning to late night, then the English Springer Spaniel may not be the right dog for you.

They require the same diligent grooming as other Spaniel breeds, but they come in a variety of colors. No matter which color you pick, though, they will come with a thick double coat that makes them suitable for splashing into cold water.

Instead of the sleek and slightly wavy coats that you'll find on other Spaniels, the Irish Water Spaniel comes with a fluffy and curly coat that's more similar to a Poodle than anything! It makes them great companions for anyone who wants a pup with a coat like a Poodle but doesn't care for the Poodle's personality or something else about the breed.

They're fluffy and relatively calmer than their English and Cocker relatives, but just as loving. They do not, however, mix with small children nearly as well as their relatives, so if you're looking for a Spaniel who's phenomenal with kids, you may be out of luck.

Bred in South Carolina, the Boykin Spaniel is a medium-sized Spaniel that was bred for navigating the lakes of its native state. Its rudder-like tail is perfect for swimming through the lakes to retrieve the game and lure ducks out from their nests. They're highly intelligent and trainable dogs who are just as amazing as family pets as they are skilled hunting dog breeds.

The Standard Poodle and its classic traits like the curly hair and regal stance may make you surprised to learn that it's an apt duck hunting dog!

They can easily wade through the water due to their hair being placed around the joints and upper torso, protecting the Standard Poodle's body from water as a result.

Furthermore, a Standard Poodle's thick hair makes it perfectly suited for going into cold water for extended periods of time.

Drahtaars are loyal and steadfast companions, making them perfect hunting dogs. They have a long history of helping hunters in Germany. Along with being extremely intelligent and loyal companions, they're also great family dogs because of their love for kids.

They don't need constant attention like some Spaniels, but they will not be happy in a home when the family is out all day.

The German Shorthaired Pointer is one of the only shorthaired duck hunting dogs out there, so if that's the kind of coat you're looking for, then you may have found your perfect pup!

Like other sporting dogs, they require high levels of physical activity because of their high energy. Nothing is cuter about this breed than their distinctive pointing motion, though, which told hunters exactly where the prey had fallen, so it would be simple to retrieve.

Although the Italian Spinone is the last to be discussed on the list, it does not make it the least.

They're not the most affectionate dog with strangers nor are they the most trainable or playful, but they are every bit the great family dog because of their loyal and loving natures. They're stubborn dogs sometimes, but, for the most part, they're willing to listen to orders when given.

No matter which duck hunting dog breed you choose, they all will provide an immeasurable amount of joy to you and your family's life. And, you can have a reliable best friend during your hunting excursions.