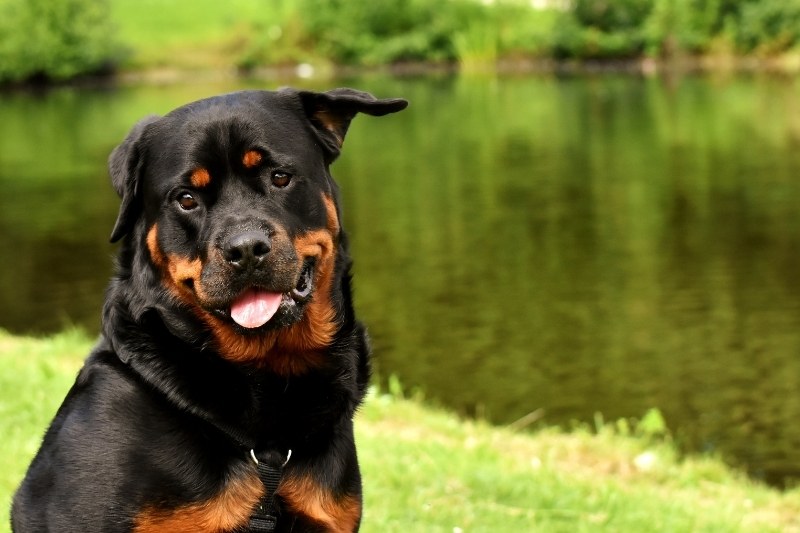 Whether it's your first time adopting a pet into your home or your fifth time, choosing which breed you want is no joke for dog owners, especially when it comes to German or American Rottweilers.

But what are the differences between them, and which one is best for you? The overview on German and American Rottweilers may help you discover your answer, but you are in for a good, cuddly time no matter your decision.

Origin and history of the Rottweiler breed

The German Rottweiler is derived from the cattle-driving dogs who accompanied the ancient Romans to Germany. Long after the Romans left, the dogs stayed behind, earning their name Rottweiler from the village they were found in, Rottweil.

Although there was a time when they almost became extinct, ancient Rottweilers ownership grew in prominence thanks to dedicated dog lovers. As a result, a club was formed in 1907 to promote the wellbeing of the German Rottweiler, named Allgemeiner Deutscher Rottweiler Klub.

Later, they were brought over to America, and the American Kennel Club deemed them an official breed in 1931.

What makes them different?

But, German and American Rottweilers' difference lies in each country's official kennel clubs. The criteria are decided by the American Kennel Club and Allgemeiner Deutscher Rottweiler Klub.

AKC permits puppies produced from two faulty Rottweilers to be classified and officially sold as purebred, even if the parents had non-Rottie characteristics. All that American Rottweiler breeders must do is report the parents' names and how many puppies in the litter, pay a registration fee and await registration.

Also, buyers of pups do not have to be made aware of parents' potential birth flaws, genetic defects, predispositions, and other issues.

The lax standards imparted by the AKC may be evident of America's goal to meet the demand for American Rottweilers. With the American Rottie ranking as the eighth most popular dog as of 2020, demand is still strong as ever.

While America perhaps prioritizes the number of Rottweilers, Germany wants only the best German Rottweilers to reproduce and have puppies with zero birth faults. As such, German rotties will look physically different. But how different, and does that affect their temperament?

Rottweilers' gorgeous fur coats and loving eyes contribute to the breed's friendly but authoritative appearance, perfect for even the casual pet owner. Their features include almond-shaped eyes, triangular ears, and a muscled neck.

The German Rottweiler has a broader nose, blockier heads, and thicker bones. But American Rotties are known for their moderately long, slightly arched neck and deep, wide chest.

Next, the height and weight of German vs. American Rottweilers slightly differ due to their upbringing and whether they are female or male dogs:

The differences are marginal, emphasizing the strict and particular standards of the ADRK.

Also, to dock or not to dock a Rottweiler's tail has a fascinating tale associated with it. Otherwise known as bobbing, a docked tail means removing portions of an animal's tail.

In America, docking is actively encouraged. As per the AKC breeding standards, American Rottweilers should have their tails short and close to the body.

However, Germany prohibits tail docking. In 1999, the EU banned the process of removing animals' tails. Although some countries still permit the process, including Hungary, Serbia, and France, Germany only allows tail docking for medical reasons approved by a veterinarian.

In Germany, the Klub will only consider a German Rottweiler a purebred if they possess their tail.

Lastly, Rottweilers have dark-colored fur, but AKC permits Rottweiler puppies with brighter colors. The different shades of American and German Rottweilers' fur may include black and rust, dark brown, black and tan, and black and mahogany colors.

The German Rottweiler and American Rottweiler's temperament tends to be highly intelligent and responsive to training exercises, provided their owners give them treats as a reward for respectful behavior. Although the breed may show their stubbornness, basic training classes and meet-and-greets with other dog breeds and people should help in the training process.

In particular, German Rotties are qualified for Schutzhund classes. A sort of breed test, the sport gives owners a chance to learn how their dogs react to stressful situations. The result could be German Rottweilers learning how to be more obedient, which makes them perfect as guard dogs, working dogs, guide dogs, security dogs, and so much more.

Both breeds practice caution when meeting strangers. They also may show alertness toward unfamiliar faces, but give them some time, and they will come to love their new friends. For the German Rottweiler, some may see them as being dominant, and sometimes quite authoritative over other dogs.

Most importantly, the German and American breeds get along well with children, and a Rottweiler makes a responsible family dog. Rotties serve the dual purpose of being excellent protectors and boisterous playmates to their human companions.

All Rottweilers possess an average lifespan of 8 to 10 years. You can help maintain their health and help them live longer by taking them to the vet for routine checkups, regularly exercising them, and showering them with affection.

However, American and German Rottweilers may experience symptoms of diseases common among both breeds, including:

A German and American Rottweiler close to their families may try to hide their physical illnesses from their beloved humans. So, if you notice their behavior is different than normal, you may need to take them to the vet and ensure your pup is in the best condition possible.

There are some fun tidbits you may not have known about your future Rottweiler's lineage and impact on human history.

How much are Rottweilers?

Despite all the fantastic information about Rottweilers, the price might be the deciding factor. For American Rottweilers, eight-week-old pups may cost $1,500 to $2,500. However, expect to invest more money in training needs and pet insurance to get the best care for your canine friend.

German Rottweilers range from $2,700 to $3,000, boasting a higher price range due to their country's official breed standards. But those living in America wanting to ship a German Rottweiler overseas to their home in the States may notice a significant shipping fee as well.

Which Rottweiler is best for you?

There is no going wrong with choosing either an American Rottweiler or German Rottweiler breed. They both will faithfully serve you and your family.

But, your preference may come down to their breeding standards. German Rottweilers born in Germany will provide you with the purest of the breed but may come at a higher cost. American Rottweilers are usually equally energetic and helpful dogs.

However, choosing family dogs could be as simple as giving them some pets, and feeling deep down that it was meant to be. So enjoy making your decision, and savor every moment with your loyal Rottweiler.