This large and robust dog has always fascinated. The image of the barrel around his neck is the first that comes to mind when we think of the Saint Bernard. The somewhat mythical side of this great dog is still present today in people's minds. This rescuer at heart impresses and retains a mysterious and intriguing side. His slightly rough doggy appearance is a deceptive reflection of his great abilities and special intelligence. The cinematographic performance of the great dog Beethoven ready to save the little one of his family, even though she is far away from home, is not far from the truth. His ability to retrieve even six metres under the snow, is official proof of this. The image of this big, hairy, sympathetic ball, ready to do anything to save his family, will stick to his skin for a long time, and rightly so.

Quick Overview of the Saint Bernard

Temperament of the Saint Bernard

This great actor, sometimes quite stubborn, is a very gentle dog. Even though he looks like a big stuffed toy, he's not.

Although not aggressive, he is an excellent guardian. Non ferocious, he is attached to his master and his territory, and he can sometimes be a little hostile towards those who dare threaten his them.

Good at rescue and guarding, his natural instincts come into play in case of danger. His instinct to protect and rescue, especially in the snow, is always present.

If a person is in trouble, he will not hesitate and will come to his aid, he is a born rescuer. He has a highly developed sense of direction and can detect odours, thanks to his wet nose, up to six metres under the snow.

He is generally kind to children and very patient. He is by nature quite docile, peaceful and devoted.

He is vigilant and tolerant with very small children. Extremely sociable, he will however know how to intervene vigorously if he feels that a danger threatens them.

The superb robe of the Saint Bernard is white and red, or brown with a very dark mask.

The hair of his coat can be short or long. His short coat is tight, dense, harsh and smooth, while the long coat is straight.

His square head is practically enormous. His eyes are medium size, and vary in color from brown to hazelnut.

His large drooping ears are triangular. His nose is black. His long tail resembles a panache, it is heavy and very long.

According to the FCI breeds nomenclature, this breed belongs to group 2, section 2 and is #61

Characteristics of the Saint Bernard

Find out if the Saint Bernard is your ideal dog breed with our quiz.

Saint Bernard puppies near me

Health of the Saint Bernard

The growth and weight gain of the puppy are very rapid and should be monitored closely. The food must be adequate to meet the exceptional needs of this large animal's rapid growth.

Once adult, however, the Saint Bernard becomes very robust and generally has excellent health.

Some specimens may be affected by osteosarcoma (bone cancer). This disease is believed to be hereditary in the Saint Bernard.

Entropion and ectropion (eyelid turning forward or backward) are also possible in the breed. The eyes must be therefore monitored regularly.

Life expectancy can be good if the specimen is not affected by one of these diseases.

The most popular of Saint Bernards being the longhaired one, his brushing must be done regularly.

It must be energetic and deep. A regular brushing time should be planned, in order to maintain his thick fleece.

This breed of large mountain dogs is apparently descended from the Tibetan Mastiff, the ancient Asian hound. The Saint Bernard as we know him today was selected by the monks of the Great Saint Bernard Hospice, from which he also gets his name.

The monks then used him for guard duty and mountain rescue. Generally trained for avalanche search, the image of the barrel of brandy hanging from the neck of the big dog often recurs in the iconography of the breed.

This practice, used towards the end of the 19th century, was intended to invigorate people lost in the mountains, or victims of cold or avalanche. Nobility, devotion and sacrifice remain the motto of the Saint Bernard to this day.

It is said that, in the middle of the 1600s, dogs were offered to the hospice by Valais and Waldensians families. The monks then created a breed devoid of the initial ferocity of his ancestor. The Saint Bernard is described in Prior Ballalu of the hospice for the first time in 1709.

It is also written that in 1700, the Chanoine Camos, local treasurer, created a wheel in which a dog was used to turn the spindle.

Several chronicles on the exploits of the Saint Bernards were subsequently published. Many travellers can consider themselves lucky to have been saved thanks to these extraordinary dogs.

Genealogical records were created in 1867 by Heinrich Schumacher, who lived in Holligen near the city of Bern. In February 1884, Léon was the first Saint Bernard to be entered in the Swiss register of origins.

On March 15 of the same year, the Swiss Saint Bernard Club was founded in the city of Basel and the Swiss origin of the Saint Bernard and his standard were recognised in June 1887 at an international congress of cynology. It was then that he became the Swiss national dog.

Until 2004, the Great Saint Bernard Hospice kept the dog breeding business, and handed it over to the Barry Foundation, located on the Swiss side of the road from the Saint Bernard Pass to Martigny, in 2005.

Many Saint Bernards have been used in movies, such as Stephen King's Cujo, Richard Pottier's Barry, and La Guerre des tuques, the highly successful Quebec movie. 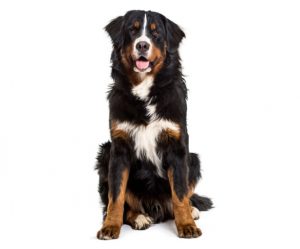