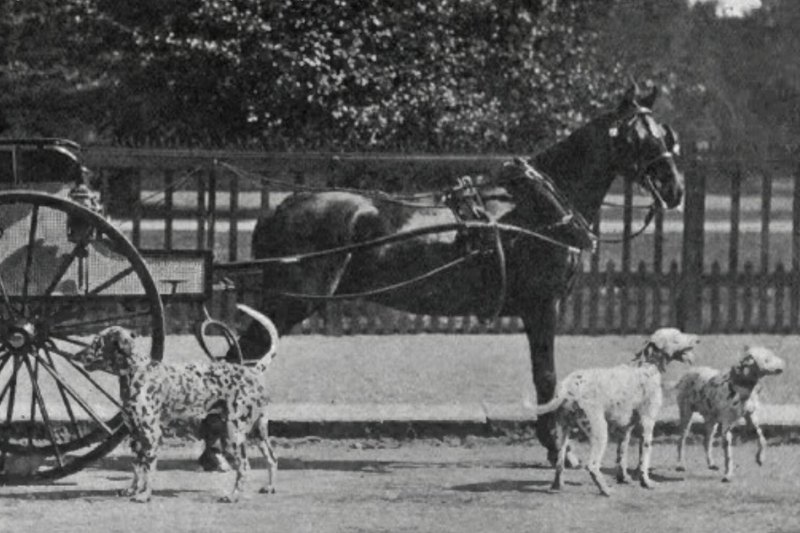 It might surprise you to know that carriage and coach dogs are not the dogs that Cinderella’s fairy godmother transformed into footmen to drive her to the ball. In fact, they didn’t pull coaches or carriages at all. So, are they a breed? A type of dog? Are there differences between a coach and a carriage dog? Here’s what you need to know.

Traditionally, carriage and coach dogs were tall, strong, and protective animals that could endure running for long distances next to carriages (and coaches too). They were used by noblemen and merchants to ward off possible threats such as highway thieves and bandits. They’d be able to alert their owners of approaching people and their size would often be enough for thieves to think twice. Because of their protective nature, they were incredibly loyal dogs and great companions for those traveling far.

A coach dog would typically get along well with horses, often living with them in stables since puppyhood. They’d be strong working dogs that could easily keep up with horses and that could be trained well. When stationary, a carriage dog would keep guard over the wagon.

There was a time when big, bright red fire engines were brown, wooden coaches. Really. It was pretty difficult for the horse-drawn vehicles to get through crowds of manic people. So, firefighters would send coach and carriage dogs ahead to clear the path for the horses and make sure that people stayed out of the way.

The most famous coach dog?

Needed for their athleticism, strength, and protective nature, Dalmatians quickly became the preferred coach dog when they came to England in the 17th century. Because of this, most people think of Dalmatians when they think of coach and carriage dogs. Dalmatians have a natural coaching instinct, high endurance, and are very watchful. Even today, Dalmatian owners enter their dogs into coaching competitions.

Other breeds of coach and carriage dogs?

Whilst the fashionable Dalmatian was definitely the most common and popular breed, there were a few others that worked protecting coaches. They were generally chosen for their long legs, tall bodies, loyalty, and forceful nature (when needed). They include Great Danes, Collies, and German Shepherds. But Dalmatians were definitely first.

What’s the difference between coach and carriage dogs?

Whilst they sound pretty similar and are often used interchangeably, there is actually a difference between these two types of dogs. Coach dogs were generally working dogs that had a job to do for their merchant. They’d run alongside the coach and help to protect it. Carriage dogs, however, would often ride in the carriage with their owner.