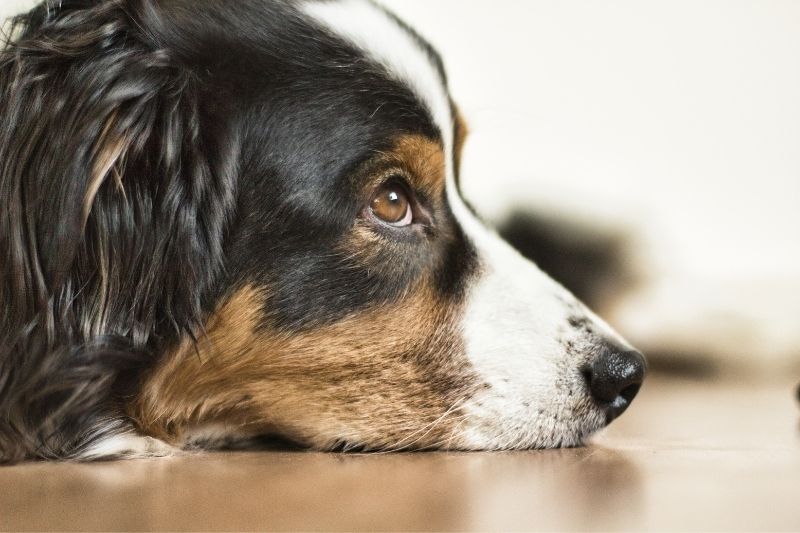 Have you ever wondered ‘what do dogs think about’? It’s something I quite regularly ponder whilst staring at my pup. Sometimes he just sits on the couch, looking out of the window at the gray sky and I’d love to know what he’s thinking about.

Did another dog bully him at the park this morning because of his new collar? Is he heartbroken? Is he bored? Or maybe he’s really just staring into space, not thinking about anything.

Well, I wanted to know a little more about what goes on between my dog’s ears…

Do dogs think at all?

When your dog comes up to you, leash in mouth,  do you really think he isn’t thinking ‘human it’s time for our walk’? Or what about when he comes into the room pushing his bowl with his nose? Of course dogs think!

And sometimes, when they’re doing something as obvious as these examples, it’s easy to know what they’re thinking. But other times, it seems impossible to know what’s going on in their doggie brains.

How do dogs think, is it similar to humans?

Dogs are highly intelligent animals, so much so that some scientists believe dogs have the cognition of a 3-5-year-old human. I know, that’s quite hard to believe when you’re watching your dog chase its own tail in the corner.

But just like small children and toddlers, dogs respond to positive reinforcement, they learn not to cross the street, they break things, and like to play.

When you’re wondering what dogs think about, emotions are sometimes a clear passageway to their brain. You only have to tell your dog off and look into his puppy dog eyes to know he’s understood he’s done something wrong. That’s kind of like a human.

No one likes being told off and we feel ashamed when we’ve done something naughty. We can’t know for sure that your dog is thinking or feeling this emotion exactly like us, but it’s clear they’re feeling something very similar.

Grief is another strong emotion which dogs have and which therefore indicates that dogs do think. There have been instances of dogs waiting at the door for their owner to come back which clearly shows they’re thinking something.

Likewise, if a dog is brought up with another pet and you lose that pet, it’s very common to notice a difference in behavior in the dog left behind. They may become more clingy, obviously sad, or mope around for a while.

If dogs didn’t think, they wouldn’t be able to feel these emotions and show them.

Anyone who has tried to train a young puppy knows the importance of repetition and positive reinforcement when they do something correctly. A bit like teaching children their ABCs. It’s unlikely that you tell a puppy to sit once and it remembers it forever.

This shows that dogs have a memory. They know that if they do something right they might get a delicious treat or a belly rub. They think about the consequences of their actions — which isn’t just when they’ve done something good.

When they’ve chewed your favorite slippers you can tell by the look on their face they know what’s going to happen. That’s because it happened last time!

Is it what you say or how you say it?

Dogs are intelligent, there’s no doubt about it. But do they understand specific words, or is it just the intonation you use?

For instance, what would your dog think if you put your boots on, got the leash, turned around, and said ‘doggies’ in the same intonation you say ‘walkies’. Would they run out the door instantly or look at you a little puzzled?

A group of scientists in Hungary carried out an experiment to find out exactly that. What do dogs think about when you say a specific word?

They trained dogs to sit in an MRI scanner so they could watch their brain function as their owners said positive words such as ‘well done’ and neutral words such as ‘however’ in the same intonation.

They concluded that the left side of the brain showed increased activity when they heard the positive words.

This means it was a word they thought about and recognized.

Do dogs think in barks?

It’s pretty difficult to ever know this, but there are a few things we can assume.

Much like when dogs dream, they think about and process what they’ve done during the day. This includes barking.

Rather than it being precisely one bark means food, higher-pitched means poop, and quiet barking means sleep time, it’s more that they are able to think about barks.

So, what do dogs think about then?

Dogs are programmed to process faces, which is why they still recognize you even if you’ve been away for a long time. This act of recognition also suggests they think about you more than you know!

Dogs also think about their favorite things and happy memories. Special walks, favorite toys, the bunnies they see in the fields, these all keep your pup occupied whilst they’re waiting for dinner.

Even though dogs and humans don’t share a common (spoken) language it’s obvious for any dog owner that dogs think and can communicate with us.

Their brains might not work exactly the same as human ones, but knowing your pup’s thoughts makes them even more part of the family.

What do you think your dog thinks about? Comment below!