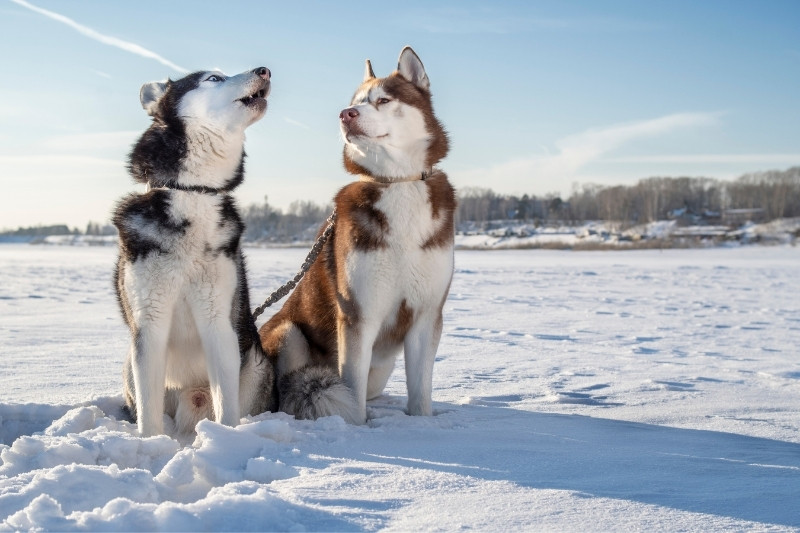 We've all seen the hilarious videos of Huskies seemingly telling their owners they love them. And surprisingly, it really does sound like they're mimicking their owner's voice in an attempt to show them their affection.

They're such talkative pups and seem to constantly be ‘telling' us something or grabbing our attention. So, why are Huskies so vocal? Why don't all dogs tell us they love us? And what other things are these fluffy, blue-eyed pups trying to communicate with us?

It's a very endearing quality of these beloved pets and one that entertains owners for hours on end (poor neighbors).

But is a Siberian Husky really trying to tell you something when he screams, growls, chirps, whines, or talks? Or is there something else to it? Here are ten reasons why Huskies are so vocal!

1- It's in their ancestry

Siberian Huskies were first bred thousands of years ago by the Chukchi people in Siberia. They were used to help them hunt and as companion dogs. As the climate began to change, the Chukchi people were forced to become more nomadic, and so started to breed Huskies as sled dogs.

They needed a pup that was capable of hauling light loads over snow and ice and that could withstand the freezing conditions. Huskies often worked together in packs to pull sleds or help hunters. This meant they naturally had to communicate more in order to work together better. Many think that because they were originally pack dogs, they developed the ability to ‘speak'.

If your pup is talking to you, try to engage them in the behavior and understand it. In all likelihood, they're telling you that they really do love you and that you're part of their pack. Ignoring it or reacting negatively to the behavior may offend your pet!

2- Are you encouraging the behavior?

Huskies are an intelligent dog breed (as well as being independent and stubborn!) which means they can read people well. Like other dogs, these pups respond well to positive reinforcement and can ‘sense' whether you find their behavior entertaining or not.

When you record your Husky talking to you or make them say ‘hello' on the phone to your friend, you're actually encouraging them to do it more! Dogs love to please their owners, and smiling and showing your friends their behavior can only be a good thing.

All Husky owners know that their pets can be pretty excitable.

Both mature pups and Husky puppies will make a lot of noise whilst they're having fun or playing. You might notice they do it more in the dog park, on a walk, when people come to the house, or when they sense you preparing dinner.

It's their way of telling you how much they're enjoying themselves and that they (or you) should do more of whatever it is you're doing!

4- They're calling their pack

As already mentioned, Huskies are pack animals. They like to be in a group (be that people or dogs) and can easily suffer from separation anxiety. You might notice your dog being particularly vocal when they're left alone or when they don't know where you are.

Vocal Huskies like to howl to call their pack. It's their way of letting you know where they are (just in case you don't know) and them telling you to come back!

5- They're reacting to noises

How often do you hear a fire truck go down the street and then minutes of howling from all the pups in your neighborhood? That's because dogs are very sensitive to sound. They might also be talking about how exciting that particular fire truck was!

But it's not just loud noises our furry friends react to. Dogs can hear tonal sounds that we can't. So, for instance, if your pup suddenly starts singing at the top of their lungs, they may have heard a noise a couple of blocks away.

They may be intrigued by the noise or it might have startled them and they can't believe that you're so relaxed!

6- Is your Husky howling because it wants something?

Dogs are good at getting what they want.

Whether by learning a new trick or using those puppy dog eyes, they're pretty difficult to resist. This vocal breed, however, doesn't shy away from telling their owners what they want.

Does your pup want to go out? Are they hungry? Is there someone at the door? Huskies tend to vocalize what's happening or what they want more than other dogs.

Unlike other dog breeds, these pups are generally very friendly and would prefer to lick an intruder than attack them! A Husky is not a particularly protective dog!

They're naturally inquisitive and like to be part of a group and make friends – which isn't the best combination for a guard dog.

8- Is your Husky stressed or anxious?

Another possible answer to why are Huskies so vocal is that they're stressed about something.

Although very playful dogs, Huskies can also be very sensitive. If something changes in their environment or there's someone new at home, you may find that this talkative breed becomes even louder!

A healthy husky will also talk a lot – as any Husky owner knows all too well! But you might notice your pup howls a little more or slightly differently if they're in pain.

This behavior might be accompanied by other signals such as sleeping more, limping, or loss of appetite. Their howl may be more like a shriek and they might not let you get close to them if they're wounded.

If you suspect your Husky is extremely vocal because they're in pain, take them to the vet as quickly as possible to check everything is OK.

Huskies are a unique breed of dog and a popular choice for many American households. The Husky personality is a wonderful mixture between independent and loving.

They're also incredibly beautiful dogs! But another unique thing about these canines is that they don't really bark. Not in the way other pups bark.

So these dogs talk, sing, howl, and shriek instead! It's their way of communicating and engaging with you!

Do you have a Husky? What do you think: Can Huskies talk? Let us know what your adorable pup can say!