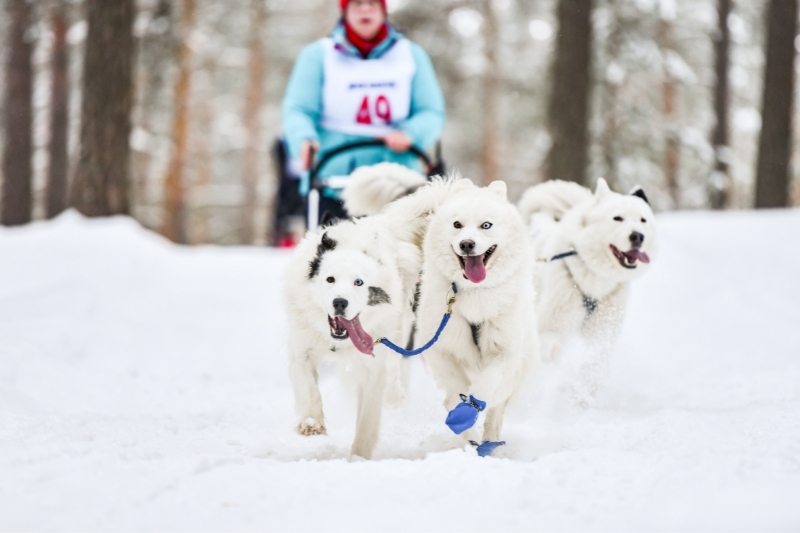 Not all dogs can be sled dogs. I’m not sure a little chihuahua could even pull a toy Santa’s sleigh around the house. But there are many breeds that excel the moment they’re put into a harness and asked to pull freight across frozen land. They’re generally sturdy, strong, and have a  thick, dense coat that lets them stay warm even in minus temperatures. They’re also generally pretty wolf-like. Here are some of the best.

Of course, this iconic sled dog has to be first on the list. They are one of the oldest known breeds and were first bred in Siberia for hunting and transportation. In the early 1900s, they were brought to Alaska to participate in dog races where they also worked in the mail service. Compared to other freighting dogs, Siberian Huskies are pretty small and weigh less, but they’re surprisingly strong and can pull heavy loads much further than some others. Their thick fur, strong legs, and well-padded feet make them ideal dogs for running over ice in some of the coldest temperatures in the world.

Alaskan Malamutes are big, hard-working sledding dogs. Related to the Siberian Husky, they look fairly similar and are easily confused. They are, however, much more sturdy and muscular. They’re not the fastest dogs but they are built for endurance and can easily pull heavy loads over rough terrain for a long distance. They have an incredibly thick coat that always keeps them warm (maybe they’re actually all fur and not that muscly). Whilst they can be good family dogs if well trained, they need a lot of physical exercise and work – which might not suit everyone.

Canadian Eskimo Dogs are big sled dogs with high energy levels that have been around for 4,000 years. They were initially bred to help the Inuits hunt and travel across the difficult terrain, with many of them often being trained to ward off polar bears too! They’re very strong and can pull heavy loads over long distances. They’re so reliable that this sled dog breed was used on many early expeditions to the North and South Pole. With the invention of the snowmobile in the 1960s, their numbers fell dramatically, but thankfully this breed is gaining popularity once more.

Chinooks don’t seem to quite fit in with the rest of the list of the best sled dogs. They’re not as wolfish looking and they’re actually pretty new to sledding. But they’re good. They were first bred to transport supplies to Antarctica and are a mix of German Shepherds, Mastiffs, and Greenland Huskies to name a few. The result was a very hard-working dog that could pull large loads and that is a great team player.

These dogs are the only native breed to Greenland and are kind of in-between the Alaskan Malamute and the Siberian Husky in terms of size and appearance. Greenland dogs are very independent and are still a main source of transportation for hunters and travelers in Greenland. They’re covered in very thick fur and are incredibly strong. Their feet are well insulated and their bushy tail keeps them warm whilst sleeping in the wild.

Just look how white and fluffy these amazing sled dogs are! They too are native to Siberia and were first used to hunt, pull large sleighs, and herd reindeer. Samoyeds are not the fastest sled dog out there and they’re not built for duration like a Malamute, but they are very reliable.

Wolf-like, elegant, and hard-working, this German Shepherd and Siberian Husky mix is a great sledding dog and can also be a wonderful, loyal family pet. They’re strong and their wolf appearance has made them increasingly popular in recent years – especially after they were cast as the Direwolves in Game of Thrones.

Eurohounds may not be what you imagine a classic sled dog to look like, but they’re fast, reliable, and are the preferred racing dogs for many Scandanavian countries. They’re a careful mix of Pointers and Alaskan Huskies, meaning they’re lightweight, fast, and agile on ice and snow. Depending on their exact mix, they can have long or short-haired coats.

A dog breed or actually just a wolf? These fairly rare dogs are recognized by their almond-shaped eyes, bushy tails, strong bodies, and large heads. As far as dog breeds go, these are genetically one of the closest to wolves. Kugshas are hard workers, have a lot of energy, and their gene pool makes them a little more reserved when it comes to humans. They need an experienced owner who has work for them.

These pups were purposely bred for sled racing in Norway. They’re a mix of German Shorthaired Pointers and the very fast Greyhound. Like the Eurohound, they’re perhaps not what’s expected from a sled dog in terms of appearance, but they’re fast, work well in a team, and are gentle family pets.

Sled dogs are unique when it comes to their physical strength, endurance, ability to withstand cold weather, and work ethic. Whilst these breeds are more accustomed to winter weather, it’s important you don’t let any pup get too cold. Here are some tips on how to keep your dog warm in winter.

Would you consider getting one of these amazing dogs?