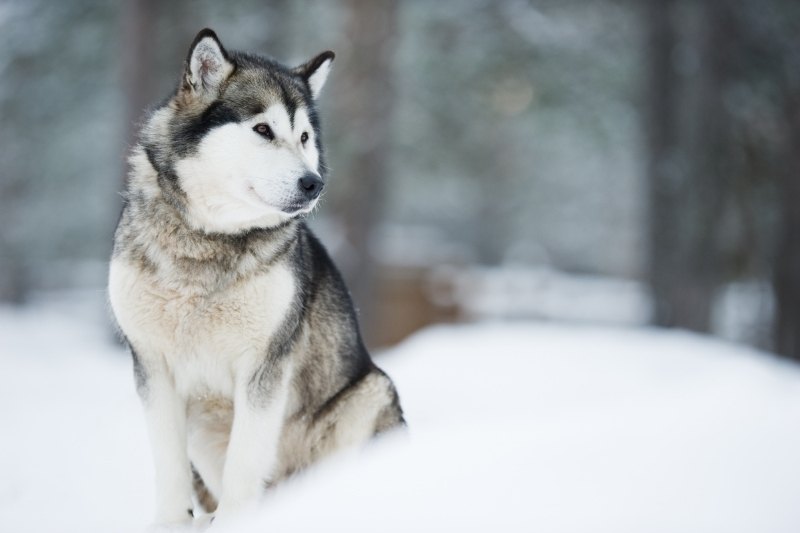 Huskies are one of the best breeds out there.

We're not exaggerating when we say these fluffy and adorable creatures have always been the top contenders in the space of domestication of animals for companionship.

It's a known fact that the canine family holds ancestors of both wolves and dogs. For this very reason, many modern dog species look a lot like wolves even though they lack the sheer size, strength, and ferocity of wolves.

Nevertheless, there has always been a high demand for these dogs. I mean, why on earth wouldn't you want a mini wolf running around your house?

If a Husky sounds like a dog breed for you, then you'll be pleased to know there's a variety out there.

To help make your decision, here are some picks for the top wolf-like dogs or dog breeds that look like huskies.

The Alaskan Malamute has an uncanny resemblance to a husky and surely looks like this breed. They are also easy to distinguish from them due to their wolf-like facial markings.

These fur buddies are adorable due to their friendly nature and a double fur coat protecting them from icy terrain. The Alaskan Malamute was originally bred to be hunting dogs and to serve as strong sled dogs.

They still remain this way today. The Alaskan Malamute is not very vocal and therefore makes quite peaceful and tolerable indoor pets.

But, be warned, the Alaskan Malamute is an avid hunter with a strong sense of prey, making them dangerous if you have other smaller pets at home.

The Czech wolfdog resembles a wolf in such huge proportions; it wouldn't be wrong to call it a small wolf in itself. It's an artificial Carpathian wolf x German Shepherd crossbreed.

The original purpose for breeding Cezh Wolfdogs was to possess the raw stamina and strength of the Carpathian and the easy-going nature of a German shepherd.

An average adult of this breed can live up to 16 years and set you back by $1500 on maintenance. The breed has an uncanny resemblance to wolves so much that the only giveaway about it being a dog is its eyes and size.

The Kugsha dog breed is native to northern America and was bred by the Native Indians, which is one of the reasons why they are also known as the Amerindian Malamute. They possess legs that can really get them places, and I mean long distances. They have been used as load carriers and sled pulling dogs too.

They are also known to be extremely social and can construct and nurture long-term bonds with humans as well as other dogs. The Kugsha is a great family dog and is full of love. They resemble the Siberian huskies in their physical features but are larger and longer when adults.

Since we already mentioned that they are consistent travelers, you may have to have an active routine to quench your furry Kugsha friend's thirst for exercise and activity. If you plan on owning them, you must provide them with enough mental stimulation as well as physical exercise.

These Russian dogs that look like huskies were bred by the Samoyedic tribes, which define the nomenclature. They are extremely similar to huskies but with completely white fur. It's for this reason; they're incredibly easy to distinguish!

These dog breeds are also known for their iconic smile and their black lips. They are highly sociable dogs. Since they have been domesticated for a long period of time, they lack ferocity. These white dogs are known to be playful with kids.

They are pretty active and require a good amount of outside time for them to keep calm.

The Tamaskan was created in Finland and recognized fairly recently in 2013. They have been growing and gaining popularity ever since.

Today there is a demand growing to own the Tamaskan dog breed. Originally, these dog breeds were bred to mimic the entire look of a wolf, except size.

They are also highly social dogs and require constant attention. Tamaskan's require a lot of physical and mental stimulation to keep them calm in the absence of which they can turn aggressive and hard to control.

This worker dog, also known as Qimmiq, Canadian Husky, and Canadian Inuit Dogs, was utilized for pulling sleds and carts. These big canines may weigh anywhere between 66 and 95 pounds and have a wolf-like appearance.

Only 300 purebreds were registered in 2008, putting the breed on the verge of extinction.

Dog owners are incredibly lucky if they own Canadian Eskimo dog pups.

The reason for this is that they are intelligent, active, powerful, robust, and devoted to their dog owners. They are not a good choice for homes with other tiny dogs due to their intense and extreme sense of prey. They prefer chilly conditions and are susceptible to heat strokes if taken to environments with a higher temperature.

They, again, are known to be extremely active and demand a lot of exercise, often far more than the average owner can provide. So, you may want to think a couple of times before deciding to purchase one of these Eskimo pups.

These pretty dogs, like huskies, are unregistered crossbreed dogs produced in the United Kingdom to produce a tamed working dog with a wolf-like appearance. The parents of this unique breed include German Shepherds, Siberian Huskies, and Inuit Canines.

This dog has a medium build and looks like a wolf in terms of form and coloration. An unskilled owner should avoid the Northern Inuit Dog.

They're extremely intelligent, but they're also obstinate and tough to teach. They also can develop anxiety issues, which can be removed from early training and socialization. Northern Inuits can also easily adapt to households with other dogs in them.

In England, Utonagans were bred with the goal of creating a wolf-like dog.

They're a cross between an Alaskan Malamute, a German Shepherd, and a Siberian Husky. Utonagans exhibit good enthusiasm towards learning and can be trained to execute various activities despite not being bred for them. They are smart and friendly dogs who get along very well with humans, particularly youngsters.

They're also reasonably active and demand lots of exercise. They would also be happy to be given a clear goal to work towards, such as playing fetch. However, they should not be given much work in warmer temperatures as this breed innately belongs to cooler temperatures.

They do better in houses with a yard and a fence rather than a closed apartment.

It might be unlikely that you haven't heard about one of the best family pets yet, the iconic German Shepherd. With its large stature, iconic black and brown hair, and erect ears, this breed is a beauty in itself.

They are dogs that look like huskies but multi-colored ones. They are the third most intelligent breed, having been developed specifically for intelligence.

German Shepherds are great working dogs due to their intelligence and are used by civil defense authorities such as the police and the fire department.

They are energetic, ready to learn, and in desperate need of work or tasks. Alternatively, they will get bored and become disruptive. They could become too possessive of their family if they are not properly trained. However, they have a reserved attitude in social situations yet are extremely loyal and protective of their owners.

Overall, Huskies, wolves, and wolf-like dogs are pretty spectacular. One of the main commonalities of wolf-like dogs is that they were all crossbred among wolves artificially by humans at one point or the other.

This cross is incredibly interesting.

First of all, you have the strength, stamina, and agility of a wolf. Second, you have the calm nature, trainability, and loyalty of a dog. Then you have a gentle beast capable of being both cute and cuddly and strong enough to protect you from harm.

Finally, these types of dogs make excellent family members are easy to train, serve as guard dogs, and more.

Who wouldn't want to own a Wolfish dog?