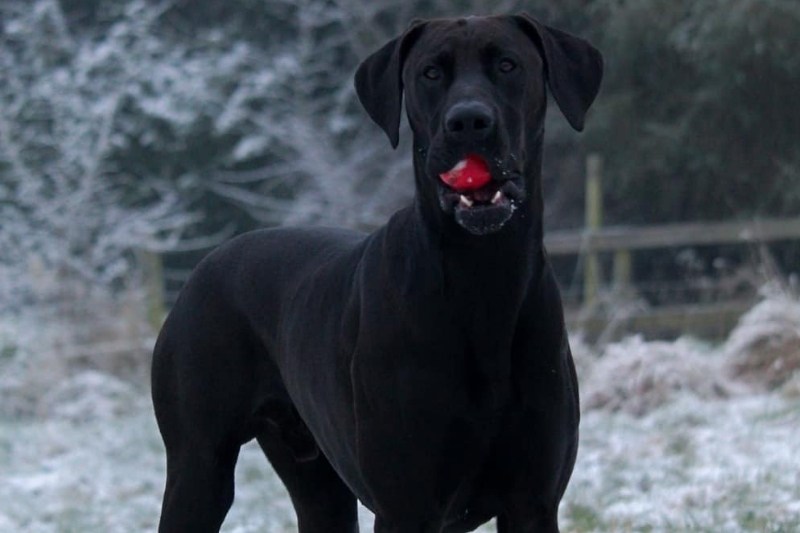 These incredibly impressive, somewhat intimidating, and fiercely loyal dogs are one of the newest designer dog breeds. A mix between the gentle giants Great Danes and the notorious guard dogs Doberman Pinschers, the Doberdane is a unique breed in terms of appearance and temperament.

Here’s everything you need to know about this wonderful mixed breed.

Lineage of the Doberdane

It’s pretty difficult to pinpoint the exact first time a Doberdane was bred, but most agree it was in the last two or three decades. It’s also likely that they originated in America.

Great Danes are one of the oldest dog breeds on record. So old, in fact, that paintings of them have been found from Ancient Egypt! Later on, Great Danes were bred as hunting dogs for nobility. The kings and queens of the past, however, quickly realized what loyal, friendly, and gentle dogs Great Danes are. Their loyalty and their size meant they were better suited to guarding crowns and jewels rather than hunting rabbits.

The Doberman was first bred by a German man in the 1800s, Karl Friedrich Louis Doberman. He was a tax collector who owned many kennels, allowing him to breed an incredibly loyal, impressive, and intelligent dog that would protect his owner no matter what.

Doberdanes are attractive dogs. There’s no doubt about that. They’re also not the kind of dog you’d like to meet down a dark alleyway – even if you’ve read this blog and remember they’re softies at heart.

They can get to a size of 30-35 inches and can weigh 100-140lbs, which makes them one of the biggest hybrid dogs out there. Their bodies are thick and strong and their chests wide. Compared to their stocky bodies, their heads can appear a little small but are generally the same form as their Great Dane parents.

Probably the most sought-after color for a Doberdane is black, but their coats can actually be brown, fawn, red, and even blue. Thanks to them being a Doberman Great Dane mix, their coats are short, straight, and quite often incredibly shiny.

Naturally, a Doberdane’s ears are floppy and hang to the side of their face – much like a Doberman's. But, also like a Doberman, many owners controversially decide to have their dog’s ears cropped. This gives them the pointy, standing-up ears we associate with Dobermans. It’s not 100% clear why it’s become the norm to crop their ears, some say it’s so they hear better and some say it makes them less vulnerable if they fight. In the case of a dog bred to guard, it also makes them look as fierce as possible. Although more common in the U.S, it’s actually a practice banned in many countries.

With the parent breeds they have, it will come as no surprise that Doberdanes are very loyal. They’re fiercely devoted and protective of their owners, making them great guard dogs. They’re also pretty scary-looking, which helps.

Even though they may look it, Doberdanes are not naturally aggressive. They guard and normally don’t attack. They’re fun, loyal, and make great family dogs that get along well with children. However, due to their size, it’s not recommended families with small kids get a Doberdane. Accidents can happen because they’re just so big.

Doberdanes are not natural hunting dogs, which means they get along well with other pets and would be unlikely to chase or attack them. But, much like with small children, their size can be an issue, so it’s not the best idea to add a Doberdane to a family that has small pets.

What could be one of the most intelligent large dog hybrid breeds? Probably a Great Dane Doberman mix. With both parent breeds being so clever, Doberdanes can be trained to a very high standard. They can be trained to be the best guard dogs, but their compassionate, loyal side also makes them great therapy dogs.

With a dog this intelligent, it’s important they have a lot of mental stimulation. Training programs are a great idea, especially obedience training. It’s important you play and educate Doberdanes to keep their brains active and reduce boredom.

Their size and their incredible strength does mean they need an experienced trainer though. Doberdanes are not recommended for inexperienced owners.

Unlike Great Danes that are not particularly active and don’t need that much exercise, Doberdanes need quite a lot – between 60 and 90 minutes a day (ideally split up). They prefer doing a mix of activities and like to have access to a large outdoor area where they can safely run off the leash. It’s important that you can keep up with their exercise needs when thinking about getting a Doberdane.

Doberdanes have short, sleek fur, meaning they don’t require that much grooming. Like with any pup, it’s important to make sure their fur is clean, which, in a Doberdane’s case, can be done by wiping them down with a wet cloth. They require little bathing (yey)!

It’s also important to make sure you clean their teeth, ears and regularly trim their nails.

One of the biggest worries about owning a Great Dane is their short lifespan, which is down to the numerous health problems they suffer from. The good news is that Doberdanes have strong and healthy Doberman Pinschers as their other parent breed, meaning they suffer from fewer health concerns than Great Danes.

Being a bit of a bigger dog does come with its own problems though. Hip Dysplasia can be common. This is a condition where the hip joint doesn’t form properly and therefore causes the bones to rub and cause pain. Even Doberdane puppies as young as 6 months old can suffer from this. If you suspect your dog has this condition, you should take them to the vet as soon as possible as there are a number of treatments.

Bloat can be potentially life-threatening for any pup – especially bigger breeds. It’s when a mixture of gases, liquid, and food can’t exit the stomach, causing a lot of discomfort and pain. Signs they’re suffering may include retching, being unable to settle, or wandering around a bit confused. If you think your Doberdane is suffering, you should take them to the nearest emergency vet right away.

These Doberman Great Dane mix-breeds are, understandably, big dogs. Which means they need a lot of food. You can expect to serve up to four cups of food a day to a Doberdane. They’re also very active dogs, so, like with any dog, it’s important you make sure they have a constant supply of freshwater.

These stunning dogs make wonderful guard dogs and brilliantly loyal family pets. Would you consider adding a Doberdane to your family? Let us know in the comments below!