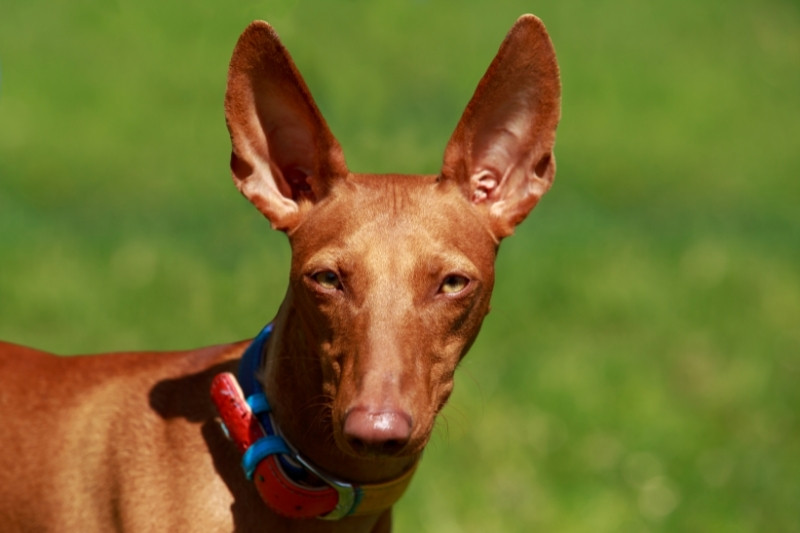 Although the ancient Egyptians were known mostly for their reverence toward cats, they also placed canines on a similar pedestal.

Dogs have been by humans' sides since far before ancient Egypt, but domesticated dogs actually originated in the Ancient Near East!

If you're looking to adopt a dog soon, then consider looking into one of these six gorgeous Egyptian dog breeds and gain a piece of ancient history in your own home.

The Basenji is most notable for its curly tail which is depicted on the tombs of many pharaohs. This ancient breed's presence in royal art implies that they were the chosen companions of many Egyptian pharaohs or, at least, animals associated with majesty and divinity.

Although pets could be companions in the ancient world, they were also seen as things that could be useful to their owners. This made the Basenji a perfect choice for anyone who had no interest in the affectionate nature of other ancient dogs as they're typically rather aloof, not really sticking close to their owners. They're far more mysterious and independent than the typical Golden Retriever and other canines that are common family breeds.

In addition to being perfectly content to roam alone most of the time, Basenjis were also apt hunting dogs. They were so successful at hunting both small game animals and strong prey, in fact, that they weren't trained much and were simply trusted to use their instincts.

The Ibizan Hound is the opposite of the Basenji when it comes to personality. Although they, too, were used for hunting rabbits and are extremely athletic, they're far more affectionate, even if they're not the best for a family with small children because of their rowdy nature.

They're incredibly fast and active canines that will require an owner who can match their enthusiasm for mental stimulation and activity. They won't be content with a lounge-about owner and will need to be taken for walks or taken to a dog park where they can socialize with other canines. Also, owners beware: this old breed has a stubborn streak!

Their pointed ears are noticeable from tomb paintings of pharaohs, and it would be easy to believe that they originated in Egypt. However, they were most likely just incredibly popular in the Egyptian region as their heritage is actually traced back to Spain's Balearic Islands, according to the American Kennel Club, and Phoenician traders and nomadic tribes helped the breed spread during their travels.

Salukis originate from the Ancient Near East and were most likely brought to Egypt and central Africa in the same manner as the Ibizan hound was.

Their most notable features are their ears which look like two large pigtails as the rest of their fur is sleek and soft while the hair on their ears is long and luscious. This gives the perfect balance of a dog with long hair and the lack of constant grooming that comes with a short coat.

These pups need love and stimulation

These dogs are perfect for anyone who doesn't want a territorial or possessive dog as the others listed so far tend to be more possessive. They're still very active Egyptian dogs as they were a hunting dog breed, so be prepared to spend some time running around outside with your pup!

They're also incredibly affectionate dogs, so you should make sure that you're ready to pepper them with love and attention. They're fairly good with small children and other canines and small pets, but it's not where they really shine.

A list of Egyptian dog breeds would not be complete without the breed with a name that is a direct reference to ancient Egyptian culture.

The Pharaoh Hound is, perhaps, the breed that people first think about when they think about Egyptian dog breeds. One of the oldest breeds in the world, the Pharaoh Hound also looks shockingly like the visages of the god Anubis which decorate many ancient Egyptian gravesites and tombs of the mighty pharaohs.

Although they have a smooth coat, they shed quite a bit more than the other options on the list. However, they're more receptive to training than other options as well, making them a good choice for those interested in dog care who want to work with their dog and train them by themselves instead of with a trainer.

They also make an exceptional choice for those who already have a dog in the home as they're very receptive to having other dogs around them.

As the name implies, the Baladi street dogs roam the streets of Egypt, usually as wild dogs. They don't have owners, and they get their sustenance instead from rabbit hunting and eating other small animals.

Because of their reputation, they're typically treated as vermin or pests by locals, even though they're one of the most ancient breeds and they can be incredibly loyal pups who form strong bonds with their owners. This makes them wonderful pets for the right person seeking dog ownership, and it also makes them great guard dogs.

They have endearing physical qualities such as their large ears making them look a bit like elves, their curly tails, and their facial expressions which always make them look like they have some sort of question to ask you.

If you're interested in adopting a Baladi Street Dog, then you will most likely have to go through a specific organization. Baladi Dogs aren't typically bred in the United States and are instead local dogs brought over from Egypt where they're usually not cared for very well due to their reputation as local street dogs.

Although not strictly an Egyptian dog, the Canaan Dog breed originates from the same general area and is thought of as one of the oldest dog breeds. It's even the national dog breed of Israel.

Compared to other breeds which originate from similar regions of the world, Canaan Dogs have particularly long fur, and they tend to shed quite a bit. They won't require constant grooming like a poodle or a pomeranian, but this fur should be something to keep in mind if you'd rather not have dog fur everywhere.

Otherwise, they're very good companion dogs, but this ancient breed will require their owner to assert that the owner is the boss of the household or else a Canaan Dog will take over the house.