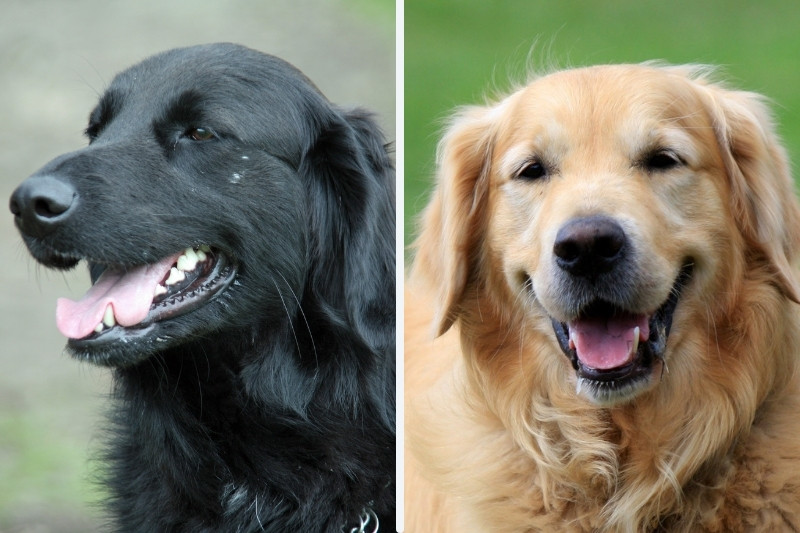 Golden Retrievers are really popular dogs (in fact, they're the fourth most popular pup in America). But have you ever heard about the Flat-Coated Retriever?

Appearance – is it all about coat color?

So, it's clear that a big difference between these two dog breeds is their coat and their coat color. But there are a few other noticeable differences and similarities between them.

Golden Retrievers range in color from light golden (almost cream-colored) to dark golden and through to red – although the iconically golden color is the most common. Flat-Coated Retrievers, however, can be all shades between solid black and liver.

It's impossible to get a black Golden Retriever, so if you see this advertised, it's most likely to be a Flat Coat or a Labrador Retriever mix.

The distribution of their fur is similar, with both Retriever Breeds having fluffier hair around their ears, and longer, feathered hair on their legs and underbelly.

Golden Retrievers can have wavy hair that isn't as silky and can even look a little ‘unkempt'.

Both the Flat-Coated Retriever and the Golden Retriever have a double coat.

This means that you can expect a fair amount of shedding and will need to brush them twice per week. You might find that a Golden Retriever sheds even more than a Flat-Coated one.

They'll also blow their coats in spring and fall as they prepare for the new season. During this time you should brush them even more to avoid having hair all over your house!

Another key difference (apart from flat coats and color) is their face shape. A Golden Retriever tends to have a rounder, slightly boxier face shape.

There's not that much difference between the two breeds in terms of size. They're both medium/large sized dogs that are fairly athletic and strong. A Golden Retriever can weigh between 60 and 70 pounds whereas Flat-Coated pups weigh between 55 and 80 pounds. In both cases, males tend to be larger than females.

Both breeds can be 21-25 inches tall and it's common for Flat-Coated Retrievers to be slightly larger.

Personality – how similar are these doggos really?

Both the Flat-Coated and Golden Retriever are very sweet-natured and love (more than anything) to be around their family members.

They're very affectionate and adore playing and being silly with their humans. When trained and socialized well, these pups can be great family dogs that get on well with children and other dogs/pets.

Although both love to have human company, the Flat-Coated Retriever is more independent than a Goldie. They don't mind entertaining themselves for short periods and can even be left alone for a little bit. Golden Retrievers, however, are needy dogs and can develop separation anxiety if left alone for long periods of time.

Both breeds have a lot of energy – and any owner needs to be prepared for plenty of activities and long walks. In fact, many owners call the Flat-Coated Retriever a ‘forever puppy', meaning they constantly have the energy levels of a much younger dog. The American Kennel Club even calls them the Peter Pan dog breed because they're forever young! So yes, regardless of which breed you get, you'll be getting a high-energy dog.

Both dogs are seriously intuitive and make great companions. It's possible that the Flat-Coated Retriever is a bit more sensitive and emotional. They're not as flexible as a Golden Retriever and don't adjust well to big changes or disruption. Both dogs (really like any dog breed) respond best to positive reinforcement during training and both are sensitive to being told off.

Whether you adopt a Golden Retriever or a Flat Coat Retriever, you're definitely not getting a guard dog. That's for sure. Both breeds love people and any intruder will be welcomed with a wet kiss rather than a fierce bark.

The two breeds are very intelligent dogs and will enjoy fun training sessions. As well as needing a lot of regular exercise, these pups also need to put their brains to use. Enrolling them in doggie classes is a good idea as this will keep them entertained and stop them from potentially becoming disruptive.

Because these two dogs are both pure breeds, they can suffer from a few common health conditions. Goldies are known for suffering from hip and joint problems (such as elbow and hip dysplasia) because they grow so fast as puppies. This is a condition that Flat-Coated pups also suffer from. It's important you don't over-exercise them when they're young as this can make their joints worse in later life.

Whilst the Flat-Coat Retriever can suffer from many of these conditions too, they also have a slightly higher risk of cancer such as malignant histiocytosis.

Unfortunately, larger dogs tend to have shorter lifespans than smaller canines, so these pups might not live as long as other breeds.

Saying that, with lots of care, a healthy, nutritious diet, and plenty of exercise, these doggos can live to be between 8 and 12 years.

It's possible that a Golden Retriever will live a little longer than a Flat-Coated Retriever.

History of both breeds

It's thought that these doggos were actually once related. They both originated in the United Kingdom and were bred as retrieving and hunting dogs. Both breeds have particularly soft jaws which meant they didn't bruise the waterfowl or small animals they were collecting.

Goldies were originally bred in Scotland by Lord Tweedmouth. He wanted an energetic family pet that was loving, focused, trainable, and sweet-natured. Basically everything a Golden Retriever is! He bred Wavy-Coated Retrievers with Spaniels (such as the Tweed Water Spaniel) and other breeds until he got a litter that contained a number of adorably golden pups. He further bred these to get the famous family dog we love today!

These dogs were first bred by S.E. Shirley, the founder of the British Kennel Club. As opposed to the Golden Retriever and popular Newfoundland, he wanted a dog with a flatter, sleeker coat that was a little more elegant.

The coat was an important factor for him, as was the morphology and head shape of the pup. Breeders presume he mixed black wavy-coated Retrievers with Collies to get these refined pups.

They were first accepted by the AKC in 1915 (earlier than the Golden Retriever)! But even with this, they faced near extinction in the 1960s when the Golden and Labrador Retriever massively grew in popularity.

So, which should you adopt?

With either of these breeds, you'll be getting an amazing family pet that will love you with all of their heart!

They're both very energetic and need plenty of exercise and to be part of an active family. If you give them lots of loving attention, they'll be happy and adoring pups.

Really, these dogs are fairly similar. The main difference is their coat color and texture, so if you don't mind that, you can happily adopt either!

Do you have a preference? Which of these wonderful dogs would you adopt? Or both!