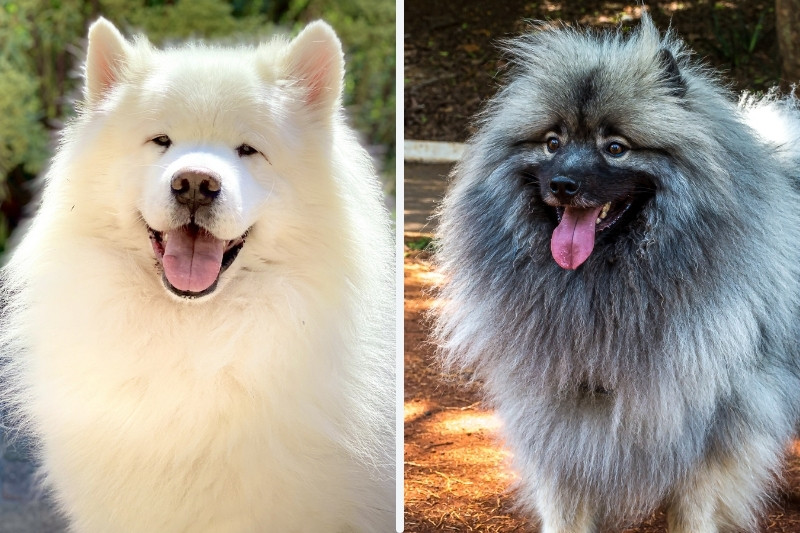 The Samoyed breed and Keeshond are both medium to large dogs that can live in chilling temperatures.

They're also very intelligent breeds with a high energy level. Therefore both require a home with a large yard to live in.

While these are the similarities, what are the differences? Keep on reading to know more.

To better understand these breeds, we must look at their origins first.

This animal is believed to first originated from Siberia in the 19th century. Tribes kept them to pull sleds, hunt, and herd animals. They were mainly working dogs for people in cold climates. Later they were taken to the United States and were domesticated.

This is an ancient breed that dates back to 1400 AD. For centuries this animal has served as a family companion and careful watchdog in Holland. In the past, you could typically find them living on farms and barges.

It's believed that these dogs have traces of the Spitz and Norwegian elkhound. However, this breed does not have any hunting tendencies; it's more likely to show fierce loyalty and a sense of devotion, making them a companion.

One originates from Holland and the other from Siberia. One was kept more as a pet for companionship; the other was a breed kept for hunting.

There are also a lot of differences in the appearance of the two breeds, such as:

This dog is normally easy to identify by its soft and white fluffy coat. It can come in other colors like beige and tan, but mainly it comes in white. The reason for the color is that it helps its body keep warm in cold climates.

Due to them having a double layer, they're also a breed that sheds heavily. It's a medium to large size and weighs 35-65lbs/16-30kg and grows up to 48-60cm/18-24inches. They're also known for their charming smile that turns up towards each ear.

This is also a medium-size breed growing up to 17-18inches/44-46cm in height and has a weight of 35-45lbs/16-21kg. Due to its size, it's a breed that can live in an apartment and does not necessarily require a large yard.

It has a thick double coat which comes in different colors such as grey, silver, black, black & cream, black & silver, and black & grey. It's a dog breed that sheds a lot and is not the best for people with allergies. The dog also has a deep chest which is barrel-shaped, and an abdomen that is slightly tucked.

The main difference is their coat color and size. Samoyed dogs tend to only come in one coat color, white, whereas the Keeshond comes in a few coat colors.

There are a lot of similarities between these two animals in terms of personality, and there are a few differences such as:

This is a clever dog that can be trained easily. It has an eager-to-please personality and loves to be around families. They're not a dog suited for busy people as they can easily get separation anxiety. Sometimes they have tendencies to nip and chase, coming back from their Siberian hunting instincts.

Therefore if you have children, this breed must be supervised. They also have a high energy level and therefore require at least 2 hours a day of exercise.

These are happy breeds who can easily become attached to other humans. Often they will show they're happy to please because they will lift their neck upwards with a big facial expression. If they are on their own for a long time, this breed can badly suffer from separation anxiety.

They are not an aggressive pet; if they see anything that's intimidating, they may bark, that's it. Their lack of aggression makes a fantastic breed for people who have children. They also love to cuddle and snuggle up to you when sat on the sofa.

The Samoyed is more likely to nip and chase instead of the Keeshond. Because of this, this breed requires more supervision to be around children.

As each breed has a double coat, you must pay attention to their coat. If you plan on getting them, you will want to do the following for grooming:

You should aim to brush their coat daily using a slicker brush and metal comb to stop their hair from getting matted. Ideally you should take them to a groomer each month to ensure their coat is intact.

Remember also to brush their hair and legs as these areas mat quite easily.

When grooming this animal, you should brush their coat once a week.

The coat of a Keeshond requires less brushing.

There health issues of each are the following:

On average, canines like these can live up to 12-14 years. They can have the following:

This animal has a life expectancy of 13-15 years and may have the following problems:

Regarding their health, there's little difference in conditions that may occur and their life expectancy.

If you're looking to buy puppies, here are the costs:

On average, puppies can cost around $600-$1500, depending on who you buy them from. The price of this breed may differ based on the breeder's reputation, pedigree parents, and location.

This canine can cost between $1000-$4000 based on the breeder, location, and reputation.

A Keeshond is costlier to buy.

Overall these two breeds are both happy and friendly dogs to own. You may want to consider adopting a Keeshond if you have children, as they're less likely to bite. Moreover, if you don't have a lot of time for grooming, you might want to get this breed too.

These pets also like a lot of exercise, so they're not good animals to own if you're busy.