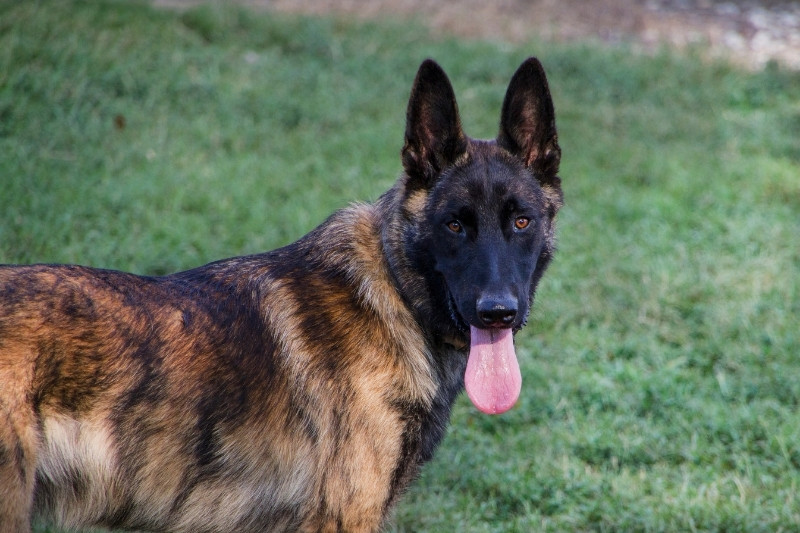 German Shepherds are amazing pets – in fact, they're the second most popular dog breed in the US (pipped to the post by the Labrador Retriever). They're highly intelligent, energetic, and very loving.

These wolfish dogs usually have a coat that's a mixture of black, brown, tan, and gold. The American Kennel Club, however, actually accepts many different colors, including all-black and all-white! This range of colors means there are a lot of dogs that look like German Shepherds – and you'd be forgiven for thinking some of them actually are!

The German Shepherd is a unique breed but there are a few others out there that you could easily mistake for these amazing dogs!

The Dutch Shepherd is a majestic dog that looks like the cross between a wolf and a hyena. Its distinctly athletic body, erect ears, and coloring make it look very German Shepherd-like too.

As with German Shepherds, these pups are amazing herding dogs that are very energetic and that need a lot of exercise. They'll constantly be up for an exciting walk, run, or play session in the park. They're very obedient and some say they're easier to train than their German cousins. They need early socialization and will excel in obedience and agility training.

Another similarity between the two breeds is that they're both big shedders. Both have fluffy double coats and need regular grooming if your house isn't to be covered in dog hair! The Dutch Shepherd is a loving and loyal dog that's a great pet for an active family.

King Shepherds are not actually a breed recognized by the AKC, but they are very impressive pups and definitely kings of all shepherd dogs. They're the result of mixing German Shepherds with Great Pyrenees, Alaskan Malamute, and Akita.

As their genetics would indicate, these dogs are huge. They can weigh 150 pounds and stand at 30 inches tall! They are kings, so of course, they're excellent herders and protectors.

Although actually very sweet-natured, these pups make excellent guard dogs purely because of their size. Not many intruders would enter if they saw a King Shepherd standing in their way!

The Shiloh Shepherd is another mixed breed that's the result of crossing German Shepherds with other dogs such as the Alaskan Malamute. They look very similar to their German relations but tend to be a bit bigger.

These dogs are very smart and need to have a job to do so that their brains are stimulated. You don't want a bored Shiloh Shepherd! Their well-balanced temperaments and intelligence make them wonderful therapy dogs. They're also often used by rescue teams and in police forces.

Shiloh Shepherds excel in training classes and will really enjoy them. They're very obedient dogs that like to please whoever is around them. They can also be really loving and protective and like attention and playtime with their family members.

Belgian Malinois are often mistaken for German Shepherds – and it's easy to see why! There are, however, a few differences that can help you to tell these two dog breeds apart.

Belgian Malinois are usually a bit smaller, have a shorter coat, and are fawn colored with a black mask. Just like their German cousins, however, they're often used by police and military forces and are fearless in their work. They also make good rescue dogs.

As well as being great working dogs, these pups are wonderful family pets. They're very caring, loyal, and can be really entertaining. They need a lot of mental and physical exercise though, so are only a good fit for active families with a big yard and time for them.

These dogs were first bred in the Soviet Union as fearless guard dogs. They were developed to withstand freezing temperatures and difficult conditions, so are very hardy dogs.

Also known as Byelorussian Shepherds, these dogs need a lot of training and a firm leader if they're not to become too dominant. With an experienced owner, they're affectionate and protective dogs that are great additions to the family.

Like most dog breeds on this list, they need a lot of exercise – both mental and physical. They're also heavy shedders, so you should regularly brush them.

These dogs are strong and stubborn in equal measures. They were originally bred to pull heavy loads over ice and snow, which explains their muscular bodies and seriously fluffy coats!

These dogs often have more white in their coats than German Shepherds but they can have black and gray coats which make them look very like their German Cousins.

Alaskan Malamutes are working dogs at heart and have a lot of energy. They need regular and vigorous exercise if they're not to become bored and possibly destructive. They enjoy spending time with their family and will like going for runs in the park or on long hikes.

The Bohemian Shepherd is very similar to the German Shepherd breed. Their iconic tan and black coats make them appear almost identical! They are, however, usually a little smaller than German Shepherds and they can be a little more relaxed.

They are, however, still genetically working dogs and need a lot of strenuous exercise. They'll benefit from obedience classes as a way of keeping them entertained and to stop them from getting bored. Like most Shepherds, a bored Bohemian Shepherd dog can be destructive.

They're highly energetic and need lots of fun and diverse training sessions. They also need a good amount of time to exercise and burn up some energy.

These dogs are normally black and can have slightly longer, fluffier hair than a German Shepherd. So yes, they're also big shedders.

Groenendaels are very loyal family pets and love to spend time playing and relaxing with their owners. They're very alert and make great watchdogs too!

These dogs are arguably the most German Shepherd-like of all the breeds on the list! They're almost identical! And they're another breed from Belgium.

Despite their wolf-like appearance, Belgian Tervuren are actually pretty sensitive. They respond best to positive reinforcement and don't like being scolded! They're seriously intelligent dogs and this intelligence can get them into trouble – especially if they're bored and looking for mischief.

They need lots of exercise and fun training classes to keep them entertained (and out of trouble). These dogs also love to have a job to do and are often 'employed' by police forces and used for tracking and rescue.

Many owners preferred the more traditional coat colors. They were therefore given a separate breed name and further bred to create the White Swiss Shepherd (also called the Berger Blanc Suisse).

Because of their close relation to German Shepherds, these dogs have pretty similar temperaments. They're very intelligent, energetic, curious, and loving. They make wonderful family pets and are excellent watchdogs because they're so alert.

Some owners say they're a little easier to train than German Shepherds but they're also a little more sensitive. So training should always focus on positive reinforcement.

Northern Inuits are a fairly recent dog breed that was developed in the United Kingdom in the 1980s. They're a mix of German Shepherd, Husky, Malamute, and a wolf hybrid. And yes, they're definitely wolfish in both appearance and personality.

These dogs are very athletic and like to investigate their surroundings. They need plenty of early socialization and training to rein in any wolf tendencies and they do best with an experienced owner. Even though lots of people will mistake these doggos for wolves, they can be really affectionate and loving family pets.

They get on well with other same-sized dogs, in fact, they'll probably do better in a home with other dogs that can be part of their pack.

Caucasian Shepherds are brave and bold dogs that have been used for centuries to protect livestock, their families, and property. They're confident dogs that are highly alert and love to be working. They're so confident that they've been known to take on wolves when protecting their flock! Many owners say that they're perfect guard dogs.

Even though they're very protective pups, Caucasian Shepherds are very loyal and loving towards their family. They enjoy spending time with their owners but are also happy to spend time alone on guard duty.

These pups have a seriously fluffy double coat that can be tan, brown, gray, cream, red, and white. It's often a mix of many colors. Like both the Dutch Shepherd and the German Shepherd (and, really, most dogs that look like German Shepherds), these pups are big shedders. When they let you, you should groom them often.

Which on the list of dogs like German Shepherds do you think most resembles them? It's hard to choose!