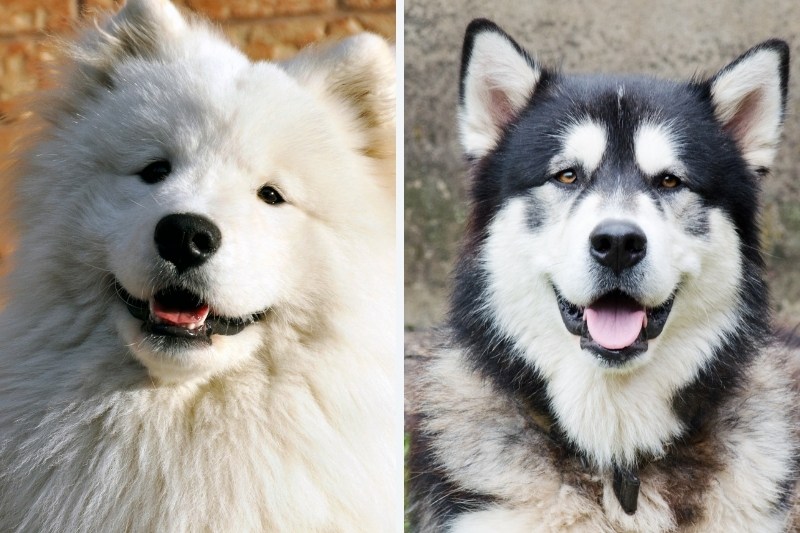 The Samoyed and Alaskan malamute are two large cuddly dogs, both from areas near the Arctic circle. They share commonalities like having a wolf-like appearance and an insane level of strength, but there are some differences.

Irrespective of their commonalities and differences, these dog breeds are excellent family dogs to own.

To know more about these two marvelous dog breeds, keep on reading.

Before we explore their physical characteristics and personality, we must first address their origins.

The Samoyed first came into existence in Siberia in the 19th century. Their original purpose was to herd reindeer, hunt wild animals, and move sleds for Samoyed people. While doing this, they were looked after a lot by the Samoyede tribe, sharing a love for these animals.

They were regularly treated like family members and show this tendency today. At the end of the 19th century, they were taken from Siberia to expeditions in the Arctic and Antarctic areas. The Samoyed breed was primarily kept as strong working dogs. Later they were domesticated and brought to the USA, slowly adapting to warmer climates.

The Alaskan Malamute is believed to originate from Northwest Alaska. It's thought that a nomadic tribe called the Inuit kept these dogs to help hunt seals, scare off polar bears and move heavy loads across a sled.

Many people think that this very old breed has been in existence for 2000-3000 years and has survived tough weather conditions across its history. Due to them being looked after by a nomadic Mongoloid tribe, they have become domesticated and are people-centric dogs.

Looking at these dogs, you might be confused, as they both were raised in cold weather and have similar living environments.

The main difference is that the two breeds come from different areas, Alaska and Siberia. While both the malamute and Samoyed were from cold parts of the world, it's the different tribes that have contributed to their unique personality we know them for today.

Often a good indicator of difference is personality; here is an Alaskan and Samoyed comparison:

This intelligent dog thrives off living in a close environment with families. In fact, they thrive so much of human company they cannot be left on their own for a long time. If left on their own, they will regularly develop separation anxiety and bark.

Moreover, if you have other dogs in your home, they will likely get along with them. However, as they're herding dogs, they may nip and chase other animals and people from time to time. They also play well with children but can be a bit too hyperactive for toddlers, requiring supervision.

The Alaskan Malamute is a dog loved by every family member as they are a playful and loving breed. They're not good watchdogs because of their pleasant nature due to their fierce loyalty towards humans. On the contrary, this is not a dog breed suitable for novice owners as they love to display their dominance. If there's no alpha in the house, the Alaskan Malamute can become bossy and rule everyone else.

They're also packed animals meaning they want to be the center of attention and involved in all activities in your household. This dog breed does not necessarily bark but is known to howl from time to time like their wolf ancestors.

Alaskan Malamutes are slightly less affectionate than Samoyed's towards their owners. They both love to be the center of attention; however, it's the Alaskan Malamute that is the nosiest when left on their own. Moreover, if you're a first-time dog owner, you'll want to opt for the Samoyed as it's less dominant to handle.

If you want to compare the Alaskan Malamute Samoyed, then one excellent way to do this is by appearance.

The Alaskan Malamute can grow up to 56-66cm/22-26 inches and weigh between 32-43kg/71-95lbs. As they originated to pull sleds, this is a dog breed that remains muscular today. They easily stand out among other pets as they have a broad, deep chest, broad skull, heavy bones, medium-sized ears, and black almond-shaped eyes.

It also has a double coat of a medium length which is thick and contains a wire undercoat. Unfortunately, due to its texture, it's not a hypoallergenic dog breed. Its coat colors come in combinations of red & white, seal & white, gray & white, black & white, white & chocolate, and more.

These medium to large dogs are powerful, strong, and robust. On average, these breeds can grow up to 55-65cm/21-26inches and weigh between 25-35kg/55-77lbs. Just like other northern breeds, Samoyeds are known for their long coat that is double layered to provide them enough insulation in cold weather.

They have a thick large coat length; their first coat is soft and undercoat with coarse and straight hair underneath. Because of this, they require constant grooming and coat maintenance. Their coat is also iconic because it comes in a solid white color; however, it's not unusual for them to have biscuit or cream-type shades.

Their smiles are equally as unique as they're upturned, creating this signature smile known as the “Sammy smile.” They also have brown almond-shaped eyes and erect ears like the Japanese Spitz.

As both breeds are working dogs, you must know about their exercise and training needs. They are:

This dog breed requires high exercise. This exercise can be split up across multiple time frames and does not have to be limited to just walks. You can take them out running, walking or playing ball.

Because of this, Alaskan malamutes are not suited to different living environments; they're a dog breed that requires a house with a least a small yard to play in.

Due to the stubborn streak an Alaskan Malamute holds, this is not a breed that's easy to train. You should be patient and consistent with them; otherwise, you may wish to opt for proper training with a professional.

The Samoyed breed is a highly active dog that requires a lot of exercise. This can be done through long walks or activities in the garden. Training should be conducted from an early age.

Regarding exercise and training, both dogs are similar in this matter.

The health of each dog differs due to the following:

On average, this dog can live up to 10-12 years if healthy. There is a risk of them having the following health conditions:

On average, dogs like the Samoyed have a lifespan of 12-13 years. They might experience the following health issues:

Generally, the Malamute and Samoyed are likely to experience similar health problems in the course of their lifetime. The only major difference is the Samoyed might live longer.

So which is better, the Alaskan Malamute vs. Samoyed?

Well, it's a bit difficult to say. First-time owners should choose the Samoyed over the Alaskan as they're less likely to display alpha tendencies. After all, the Alaskan requires a lot of discipline and dominance to train.

They're both heavy shedding breeds, which means that they're not ideal for allergy sufferers to own. On the contrary, they thrive off being around family and love most people.

Moreover, there is only a slight difference in their life expectancy, and health problems are pretty much the same. It's their temperament and appearance that make them the most different.