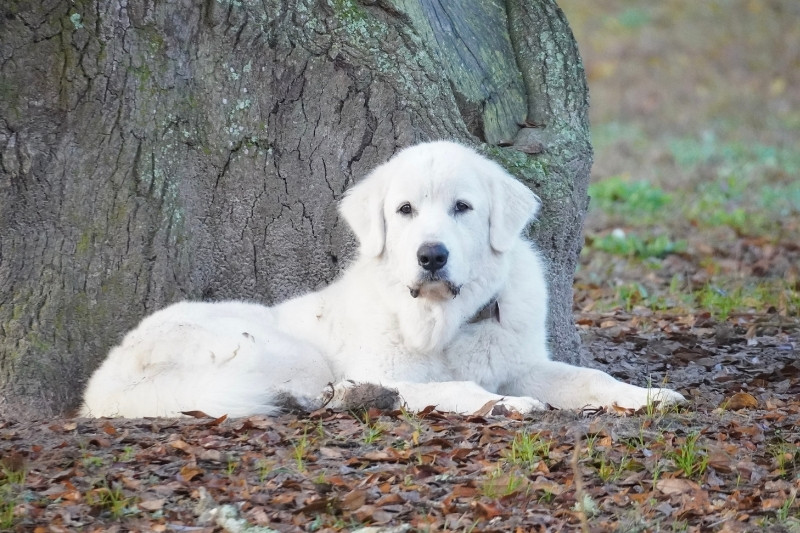 The Great Pyrenees is a stunning dog breed.

These gentle giants will most likely win the heart of anyone they come into contact with. If you're looking to find one of these dogs for your home, sometimes it can be a bit difficult to locate a specialized breeder in your area.

To help you with your selection, today, we will look at the top dogs that look like these breeds. Here are some of the best dogs that are the most similar to Great Pyrenees:

This dog originates from Italy and originally existed to herd goats and sheep. It also has similar lines and ancestry to other Eastern European breeds such as the Kuvasz and Pyrenean Mountain Dog.

What makes the Maremma unique is their temperament. They're known to have a friendly, loyal and intelligent nature.

Due to their working origins, they're a dog breed that can be easily given a task and do the job. They're also known to be watchdogs, so they're not a dog breed that does well around strangers.

While they aren't aggressive, they will bark or use their bodies as a barrier around unknown people.

The similarity between these two dogs is their size and color. Both are large muscular breeds that primarily come in white. Plus, they both have a double coat that is straight or wavy.

The Kuvasz originates from Hungary, dating back to over 2000 BC!

Its original purpose was to guard livestock like horses, sheep, and more. Today this dog is not used for those purposes, though; it's mainly a companion animal. This dog breed is renowned for its loyal, bold, and assertive nature.

They have a strong protective instinct and will go out of their way to protect any family member. Often they're incredibly wary of strangers, and it will take time for them to trust someone.

If you plan to own this dog, it's important to take it through rigorous socialization at a young age, so it does not perceive things as a threat.

Moreover, they're dogs that get along well with children, as long as they're supervised. Children who are boisterous or make a reckless choices may be seen as a threat as the Kuvasz.

First of all, the Kuvasz is also a large dog breed that has a similar height and weight to the Great Pyrenees. The Kuvasz can grow up to 65-76cm/26-30 inches and weigh between 40-52kg/88-115lbs. Plus, their coat color is mainly white.

This is a dog breed that comes from Leonberg in Germany. Before they were known as domesticated animals, they were dogs mainly kept for pulling carts and kept for one the farm.

Today, they're a giant athletic dog that loves to be playing and having fun amongst the family. The Leonberger is renowned for its affectionate and intelligent nature. They're a dog breed that can be easy to train and play with.

Moreover, they're not aggressive canines either, but they do have guard dog tendencies making them bark if someone unusual is around.

These dogs are similar not to their coat color but their jumbo size and facial structure. The Leonberger can weigh up to 41-75kg/91-35kg and grow up to 65-80cm/26-31inches. They also have a double coat and texture like the Great Pyrenees.

The roots of the Samoyed can be traced back to Siberia in the 18th century. Mainly, the Samoyed were herding dogs. They're dogs renowned for their happy nature, typically displaying a wide grin known as a Sammie smile.

The Samoyed is also a playful dog and has no aggressive tendencies, therefore is great around children.

If you want to own one, you must dedicate a lot of time to its exercise, as they need vigorous workouts. Moreover, you should not leave these dogs too much on their own because they can easily develop separation anxiety.

The main factor that signifies similarity in these two dogs senses that they both have a fluffy white double coat. In addition to this, they both have iconic smile, making them look happy.

Originating from Switzerland, the White Swiss Shepherd Sheepdog used to herd sheep. Today this breed is a great family pet that is lively and loves playtime. Due to their alertness and lively nature, they're a breed you'll never get bored of.

They're also gentle dogs that don't particularly have an aggressive nature but do require some supervision around children due to their size. The only time they might act aggressive is if they feel a sense of threat or fear from a stranger, which can be eliminated if you undergo socialization at a young age.

Well, the main reason they look similar is their coat color and size.

They're both white and medium to large size dogs. The White Swiss Shepherd Sheepdog is distinct because their ears are pointy, whereas the Great Pyrenee's ears drop. Moreover, the Great Pyrenees is slightly a more muscular and chubby dog.

Overall, these are just 5 cool dogs that look slightly similar to the Great Pyrenees.

Mainly they look like them due to their size, coat color, facial structure, and texture. While they do look alike, you might want to check their temperament out before buying to see if they're a match that fits your lifestyle and family.