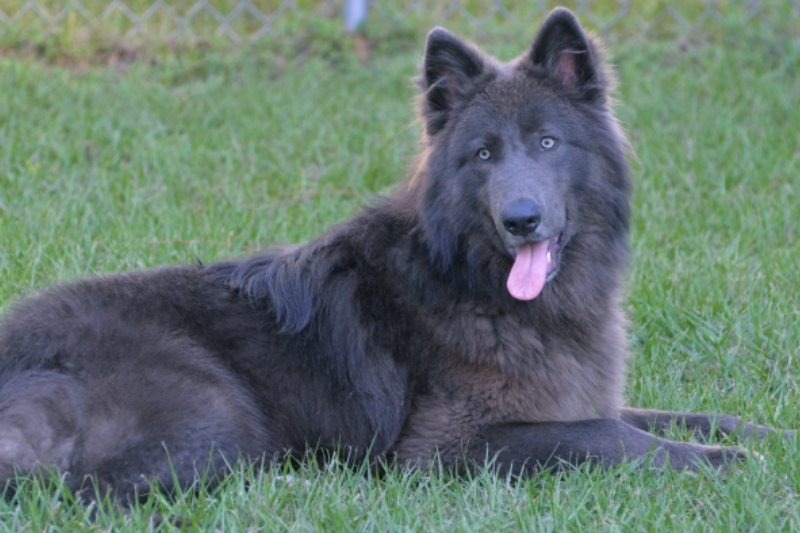 The Blue Bay Shepherd is a striking dog with piercing light eyes, a wolfish appearance, and a stunning colored coat. It's also intelligent, affectionate, and gentle. You're going to want to get to know this amazing mixed dog breed (that's still in progress)!

The Blue Bay Shepherd wouldn't be around if it wasn't for the hard work of one lady, Viki Spencer. It's not normally very easy to know the exact origin of many dog breeds, but because the American Blue Bay Shepherd is so new, the development has been well documented by Viki.

She wanted to create a breed that had the good looks of wolf dogs and all the best traits of an Old German Shepherd. Understandably, she's fairly secretive about which other pups are in the mix, but it's thought there may be a little Alaskan Malamute and Siberian Husky (amongst others). She's mentioned in interviews that there are eight in total.

She hasn't wanted to mention too much about the breeds involved as she's committed to breeding a healthy dog that doesn't suffer from as many illnesses as the parent breeds and that isn't aggressive. She wants to avoid dogs being bred just to ‘look' like the Blue Bay Shepherd.

After years of development, the first litter was born in March 2011 and these dogs were 6 generations removed from wolf dogs. Some pups have had up to 16% of wolf DNA but Viki tries to keep it to below 6%.

Blue Bay Shepherds get their name from their beautifully colored coat and where they're bred – Palm Bay, Florida!

Temperament of the Blue Bay Shepherd

Because the first litter of Blue Bay Shepherd puppies was only born in 2011, it's too early to say what the exact temperament of these very attractive pups is. There are, however, similarities in personality between different Blue Bays.

Most Blue Bay Shepherds are really affectionate – even if their wolfish appearance would suggest otherwise. They're happy to be around their family or people they know and aren't aggressive in nature. This means they don't make the best guard dogs, although their dark blue coat, bright eyes, and size will probably be enough to deter most intruders.

Because these dogs are a mix of wolf dogs and Old German Shepherds (the breed, not elderly regular German Shepherds!) they do tend to have a lot of energy. They're very playful and will love/need regular hikes, walks, dog sports, and socialization in the dog park. Blue Bay Shepherds, however, are also pretty chilled dogs and won't mind curling up on the couch and relaxing. They're a pretty perfect companion dog!

The amount of wolf DNA in a dog also has an effect on the Blue Bay Shepherd temperament. Those pups with a higher percentage of wolf blood may be slightly more timid and even a little independent. This shouldn't be too much of a problem, though, and with the right training from a young age and plenty of positive reinforcement from you, you should have a loving and fun pup.

The American Blue Bay Shepherd is a really striking dog. They're large and sure to be a topic of conversation at the park!

Despite their name, not all Blue Bay Shepherds are blue (which is actually gray). Because they're such a new breed, their coat isn't yet standardized and other colors are possible. You can get a white Blue Bay Shepherd, a beige one, cream, and a mixture of black, tan, and blue.

As with many other wolfish dog breeds, the Blue Shepherd dog can have a long or medium-haired coat. Both will need regular brushing to remove dirt and prevent any mats from forming.

Blue Bay Shepherds have large, athletic bodies. Their noses are pronounced and they have pointy ears that stand upright. They can have blue, light brown, or green eyes.

Blue Bay Shepherds are a unique and very new breed. In order to be accepted as an official breed by the American Kennel Club (and other major kennel clubs), breeders will have to ensure all breeding dogs breed true (they have puppies of uniform color), as well as other criteria.

Vets and experts are still not 100% sure of all the possible conditions that Blue Bays could suffer from. Unlike other breeds that have been studied for many decades, Blue Bay Shepherds are just too new to know everything about them.

Having said that, there are a few conclusions that can be made. Dogs with higher levels of wolf DNA are generally healthier than those with much lower levels and can even have a longer life expectancy.

Hip and elbow dysplasia are likely to be a problem for Blue Bay Shepherds (as they are for many large breeds, especially German Shepherds which have contributed a lot to this breed).

Blue Bays can also suffer from bloat, a potentially fatal condition that affects the stomach. As with all breeds that suffer from this, it's recommended not to exercise them too soon after eating and if you do suspect your dog is suffering from it, you should take them immediately to the vet for surgery.

This breed can also suffer from epilepsy and eye conditions common for pups with lighter-colored eyes. It's best to take your Blue Bay Shepherd for regular check-ups at the vet to catch any conditions early on and get treatment.

Would you consider getting a Blue Bay Shepherd? Why? Why not?